“California has a quarter of the nation’s homeless.”  This was one of the many stunning facts about homelessness that twenty plus Penn volunteers learned during a chilly evening in January when we gathered at 10:30 pm at a church in Santa Monica before heading out to “count” the homeless.

Our Penn Serves LA group was part of a phalanx of thousands of volunteers who were deployed across Los Angeles over three evenings in late January to count the homeless, which would then determine how resources will be distributed and to measure how local and state governments are doing in their efforts to manage this exploding challenge.  Between 2016-17, homelessness surged by 26% in Los Angeles County to a devastating 55,000 people.  In 2018 there were 957 unsheltered people in Santa Monica, up 4% from the prior year.

In 2017 LA County voted in a quarter-cent tax through Measure H, which will raise $355 million a year over a decade to help with outreach, shelters, and housing.  The “crisis on the streets” is immensely complicated: mental, health issues, high rents, lagging wages, etc., etc.  As Martin Luther King said, “There is nothing new about poverty. What is new, however, is that we have the resources to get rid of it.”

For the Santa Monica Homeless Count, we were divided into sixty-odd teams of four people, and each team was given a precise map of an area where we were to walk and make note of people sleeping on the streets or in cars.  Prior to heading out, at a time chosen because homeless people are usually settled by midnight and thus we could get the most accurate count, we received training about how to identify homeless individuals and encampments. 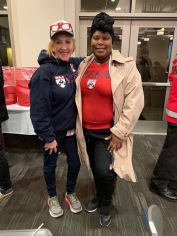 Over fifty people representing the police, mental health professionals and elected officials were there to support the volunteers.  Terry O’Day, the Mayor of Santa Monica, explained how Santa Monica cares for its homeless with a continuum of services aimed at addressing the problem and preventing its expansion. Each speaker was moving and inspiring, and all shared in expressing that it will only be through collective efforts that homelessness can be eradicated.

The rallying cry was, “Volunteer, Donate and Advocate” to solve the problem.  Imagine if each of us either gave an hour a week of our time, gave $5 a week of our money or wrote a letter every week to a politician what might be accomplished.

And with that, we hit the streets with our teammates.  It was very cold and very dark, but of course, we were only out on the streets for an hour or two…imagine!

You can read the results of the 2019 Santa Monica Homeless Count here and see a video about this year’s count here (we saw a few of our Penn Serves volunteers have cameos in the video).

Since our founding in 2012, we have done everything from serving meals to the homeless to restoring the environment to fixing homes. Six times annually, we find another great opportunity to learn about interesting nonprofits, lend a hand and enjoy a fun experience with fellow alumni.

We invite the Penn community in Los Angeles (alumni, parents, and kids) to join us at a future event, to help spread the word and to help us plan future activities. Join us, meet new Penn people, demonstrate what service means to your kids and friends, and help fellow Quakers make a little bit of difference in our complex city!