In June I had the amazing opportunity to participate on a Penn Alumni Travel tour to the northern California National Parks including Yosemite, Kings Canyon, and Sequoia.  We saw and learned so much that, among other things, the trip altered my thoughts about guided tours. If you want real R&R, expert insight into nature, history, and the cultural aspects of what you are seeing, and to cover a lot of ground getting to amazing places, this kind of trip is for you.

The group included two tour guides and 42! university alumni representing Penn, Northwestern, Notre Dame, Perdue, the University of Texas, Columbia, and Boston University. After our first happy-hour we were all old friends, and it stayed that way for the full nine days! We started out in San Francisco, but beat feet to Sonoma Valley’s wine country where we toured the Kunde Family Winery, a five-generation vineyard. After sampling the Chardonnay, Merlot, Pinot Noir, AND the Cabernet, we entered the underground wine caves and sipped from an unfinished barrel of red while listening to legends of the family business. Though my personal preferences tend toward gin, tequila, or aqvavit, this visit definitely rekindled my interest in California wines.  Just yesterday I found Kunde Estate wines in the Pennsylvania liquor store.

From Sonoma we headed east into the Sierra Nevada, and eventually climbed 6,225 feet to Lake Tahoe, the highest and largest alpine lake in the United States.   I’ve wanted to see Tahoe for a long time and in fact it is what inspired me to sign onto the trip.  Though there in the wrong season, and without my skies, I was not disappointed. An incredible blue, Tahoe is 21 miles long and an impressive 1,600 feet deep, surrounded by snow-covered peaks.

As a specialist in Native American material culture, it was my pleasure to fill the group in on the fact that while a vacation retreat and tourist destination for many, Lake Tahoe is also the spiritual center and place of origin of the Washoe Indian people, and remains as such today. Through my lectures, I introduced the weaving traditions of Washoe and northern California Indian tribes, some of the finest basketry in the world.  In the late 1800s, weavers skillfully adapted their work to meet the demands of the burgeoning tourist industry in California.  The American Craftsman Movement (1895-1920) celebrated handmade Indian weaving and encouraged a collecting obsession of Indian art across the country.  This was also the Golden Age of Museums, and it is no surprise that the Penn Museum houses exceptional California baskets, of which I shared many examples.  The tragic irony of saving Indian art while killing off Indian people was not lost on my audience.  Later in the trip I introduced NAGPRA and the repatriation movement with a special focus on issues important to California tribes today. 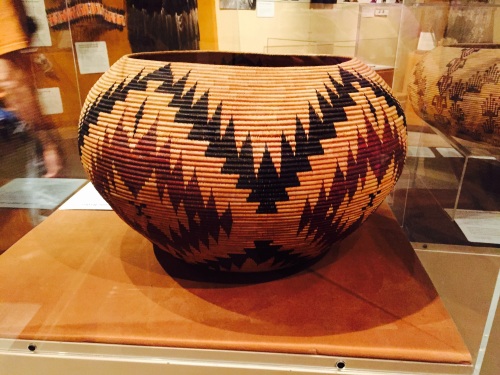 A Mono Lake Paiute basket at the Yosemite Museum

From Tahoe we traveled east over the Sierras and into Nevada’s Mono and Paiute Indian country, back into California, past Mono Lake (one of the most beautiful places I have ever seen), and entered Yosemite National Park from the east.   We spent two days in Yosemite, taking in all of the sites along the Valley floor (Half Dome, Yosemite Falls, the Ahwhannee Hotel named after the Chief of the tribe that inhabited the Valley), and had free time for hiking on ones own or for group tours. My son took off on the 7 mile hike to Nevada Falls, and I spent the afternoon with Barbara Beroza, the Curator of the Yosemite Museum, looking behind the scenes at Washoe, Paiute, and Miwok Indian baskets, and with Phil Johnson, a Miwok/Paiute interpreter in the gallery. Phil showed me a clever and rarely collected woodpecker trap, a long and skinny twinned basket that is tied to a tree over a hole where the ubiquitous woodpeckers are nesting!

From Yosemite we spent two more gorgeous days in Kings Canyon and Sequoia National Parks. Sequoia is less travelled and incredibly vast and wild. In addition to much welcomed snow and rain, we saw an abundance of woodpeckers and blue Steller’s Jays, and a total of seven black bears eating grass in open meadows.

But the highlight of the trip was the magnificent Giant Sequoia trees, Sequoiadendron giganteum, the world’s largest living trees that are well protected and cared for in these parks. The General Sherman and General Grant trees standing 275 and 268 feet tall, respectively, were massive and incredibly impressive. While taking them in, I revisited John Muir’s writings and the early history and struggle to secure these incredible parks.  I was continually awed by the grandeur of the woods and reminded of the difference a single person’s actions can make.  And it was a pleasure to be traveling with so many like-minded enthusiasts of nature and of our National Parks.

With reluctance, we descended west from the cool, quiet, and lush seclusion of Sequoia and across the northern edge of the Central Valley, aka “the Salad bowl.” Impressively, this region grows a staggering one half of the produce in the United States! and we passed mile after mile of thriving walnut, pistachio, almond, peach, pear, nectarine, plum, cherry, and date trees, acres of lettuce, miles of artichokes, and on and on.  After a private tour and elegant dinner at the Monterey Bay Aquarium, we ended our trip at Carmel By the Sea with a tour of the still active Carmel Mission Church, established by Spanish Jesuits in 1793.

The trip gave me the opportunity to experience some of the United State’s most incredible natural beauty, where some of Penn Museum’s California collections were made and used, and time to reflect on the importance of our mission to steward and share those collections broadly.

[Interested in traveling with Penn Alumni Travel? Visit our 2016 schedule here. We will be visiting the Southwest National Parks in September 2016.]

Penn Club of DC at the Citi Open

Another summer in DC and another great Citi Open tennis tournament is just around the corner.  This year’s field is the best in years with many of tennis’ top-ranked players coming to town.  And thanks to the Penn Club of DC, Penn alumni have enjoyed a “Penn Night” at the tournament each and every summer for over 20 years.  Why do I like to take part in this event?  Simply put, the Citi Open experience is a tennis Wonderland.  When not in your seat watching tennis with Penn friends, you can walk around the festival grounds to visit the sponsor tents, spot the tennis stars (and perhaps get their autographs), check out tennis merchandise, enter free raffles, and take advantage of numerous food and drink options (including access to the air-conditioned Courtside Club – only with the Penn Club ticket).  Holding true to the Tennis Center founders’ wishes, a portion of the proceeds from the Citi Open benefits the Washington Tennis & Education Foundation (WTEF). The WTEF seeks to improve the life prospects for underprivileged children of Washington, DC.  Through its education and athletic programs, tens of thousands of DC’s at-risk children have been nurtured through the support of WTEF’s caring patrons, staff and volunteers.  I look forward to this year’s gathering of Penn alum and friends at the Citi Open on Friday evening, August 7th.  For more information and our group rate tickets, see https://squareup.com/market/penn-club-of-dc/citi-open.