Penn Serves LA visited the Westside Food Bank in Santa Monica on October 24 to lend a hand. Here is the report of their day by Jane Gutman, CW’73, PAR’14, PAR’16.
18,000 pounds of fresh pears, apples and peppers arrived yesterday, to everyone’s surprise, at the Westside Food Bank.  In a few days it would rot… Quakers to the rescue! 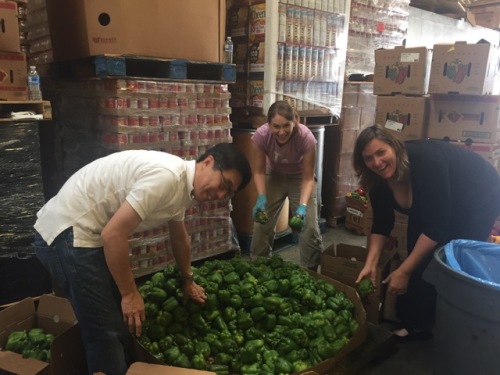 Feeling pumped following last night’s under-the-lights football win over Yale, over twenty-five members of the Penn family met at the Westside Food Bank to pitch in for another worthy and enjoyable Penn Serves LA project.  The food bank distributes 4.5 million pounds of food each year to 70 local social service agencies.  Half of this food is donated through collection drives by churches, synagogues, schools, the mail carriers, etc., and in addition, the Westside Food Bank purchases an average of $16,500 worth of nutritious food each week.  We were shown a moving video about the work of the Food Bank, the grateful recipients, and the importance of distributing healthy foods:  more produce and protein, less sugar and fat.

We were shocked to learn that the beautiful food we gleaned and packed today would have been thrown out by farmers were it not for the Food Bank’s efforts to collect healthy produce to assist our food insecure friends in LA.  They pay a small amount to have this food trucked in, and whenever it arrives they need to quickly sort it and box it so that people can “shop” at local agencies for wonderful farm fresh fruits and vegetables.
The Quakers built and filled boxes and worked in the hot sun to get the job done.  As usual, we had all ages and all schools represented.  The time flew by and the last box of peppers found its way into the cooler – we took care of 18,000 pounds of produce and felt good knowing a few thousand people would enjoy healthy snacks this week because of our efforts. 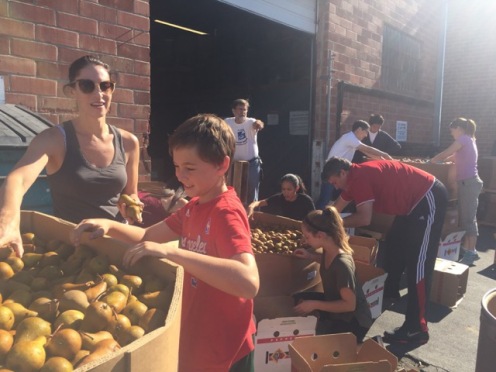 Penn Serves LA has many terrific projects for all ages on the calendar for the coming months.

See the video about the WestSide Food Bank: