Farewell from the Sweeten Alumni House

After fourteen years working for Penn Alumni in our West Coast Regional Office in Los Angeles, today is my last day as a Penn employee.

It has been my honor and pleasure to work with the amazing volunteers and Penn Clubs that are literally all over the world. This was not just a job for me but a real love and passion to support Penn on the west coast. I will miss working with all of you.

Penn physically resides in West Philadelphia, but after talking, emailing and visiting countless alumni outside of the 19104 zip code, I believe that Penn’s heart is with our dedicated alumni that live and work in every corner of the world.

In front of the Love Statue with my fabulous colleagues Carol Romani, Kristina Clark, Marge Tinsley and Janell Wiseley.

I leave Penn today as an employee, but remain a dedicated and loyal alumna, from the great class of 1993 (see you in May 2018 for our 25th reunion)! 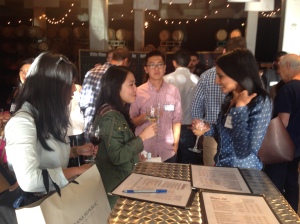 The Penn Club of Northern California welcomed the Class of 2014 to the Bay area with their Annual First September Wine Tasting.  This celebration was held on Saturday September 13 at DogPatch Wine Works, where some of our alums make wine.  The crowd of just under 100 wine tasters included both undergraduate and graduate alumni with more than half of the attendees from the Class of 2014!  It was fun to see classmates reunite, not knowing each had been fortunate to land in San Francisco.  It was great occasion for Quakers to mingle, nosh and sample wines.

Ethan Smith, Treasurer of the Club and a DogPatch wine maker, welcomed the new alumni to the area with a toast, and encouraged all to get involved with local Penn activities which include interviewing high school students and volunteering with the Club.  Ethan introduced the Club Board members who were enjoying the tasting but also ready to answer questions about how all alumni can become West Coast Ambassadors for Penn.   He concluded by inviting all to attend the Club and Interview Program Happy Hours in October to kick off the interviewing cycle. 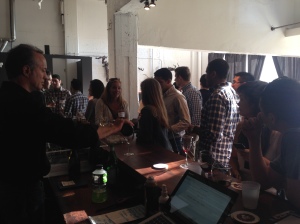 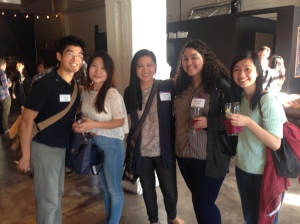 Penn Alumna, Love of Jewelry, and the Penn Museum: Perfect Together

Karen Moustafellos, SAS ’90 incorporates elements of the Penn Museum’s aesthetic in her elegant and restrained jewelry designs. She founded EnA Fine Jewelry in 2006, more than a decade after sketching the Museum’s dramatic spaces as a student.

Now she’s returning to her roots and honoring the Penn Museum as muse—EnA Fine Jewelry has named Dr. Julian Siggers, Williams Director of the Penn Museum, and Marianne Lovink as the “Cover Couple” of its 2014 special catalog. To celebrate, EnA is donating 20% of all catalog purchases through October 30 to support the Penn Museum’s educational programming.

Coming from a multi-generational Penn family, Karen isn’t sure how many of her Philadelphia neighbors know about the treasures within the Museum’s galleries, so this campaign is her effort to spread the word.

Her undergraduate class assignments for “Design of the Environment” often included sketching the grand marble staircase off the Museum’s Kamin entrance, and the Chinese Rotunda. 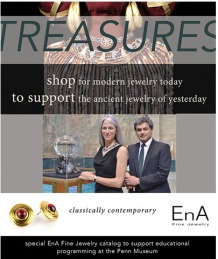 “We often drew from the perspective of looking up or down the staircase, allowing us to capture some of the artifacts in view. As for the Rotunda, it’s dramatic and challenging, yet rewarding to sketch because there’s a spare, restrained aesthetic that is also elegant,” says Karen.

Karen’s EnA Fine Jewelry will be among two dozen spectacular jewelry and accessory designers and companies being featured this year at the upcoming Treasures Jewelry Sale and Show, organized by the Museum’s all-volunteer Women’s Committee and running October 30 through November 2, in the Kintner-Dietrich gallery wing of the Penn Museum. Only select pieces from the 2014 EnA special catalog will be available at the Treasures Jewelry Sale and Show.

Following the tradition of hosting 1st September events throughout the country, The Penn Club of Chicago descended upon the Lakeview neighborhood to popular bar Mad River for a night of intellectual challenge, beers, and wings. Coincidentally, Mad River also happens to be the only known official Philadelphia Eagle bar in the city, a rare occurrence in Chicago Bear country.

With great marketing support from Laura Foltman, from the Alumni Relations Office, and our club president Michal Clements, we were able to make this the largest attended Quizzo event for the Chicago club, possibly turning this for one night into Smokey Joes Midwest

36 alumni and 6 guests split into 5-6 separate mixed teams. In all Penn brought 40+ people to a bar on top of their normal crowd. We had a mix of everyone from recent undergraduate grads to recently minted Wharton MBAs.  Among those in attendance were incoming Penn Club of Chicago president, Peter Exley (GAR 1990), Sarah Doherty (SEAS’10 and VP of Young Alumni and yPenn chair), as well as founder/proprietor of new Chicago based craft brewery Moody Tongue Brewing, Jeremy Cohn (W’09).

Mad River is known for its eclectic and wide ranging mix of topics from general pop culture questions to world history, and is a very popular destination among the Chicago trivia scene. Among the answers asked which team Penn answered were correctly naming the famous video game series Castlevania, or identifying the football team of Hall of Fame defensive end Michael Strahan, and identifying the Jim Carrey movie where this written quote appeared from (Liar Liar), or naming the band who sang this song (Semisonic). Going into the final question, 3 of the Penn teams were in the top 5.

Sarah provided an impromptu raffle of the Penn swag graciously provided by the alumni office. She also boldly predicted in an email earlier that week that Penn would come out on top of trivia. With all the recent Penn accolades including Best College Nationwide , Number 1 Party School , it only seemed logical that that Quaker domination continued. Her premonition proved true. Team Penn brought that swagger into the final question with the top Penn team going all-in the final question. Game set match. Victory! The bar manager came over to let us know that we had unseated a team that had won 4 of the last 5 trivia nights. Could this be the beginning of a new dynasty? 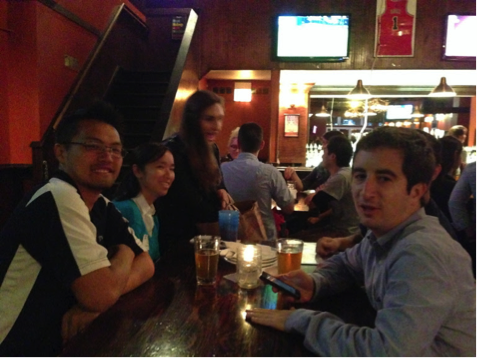 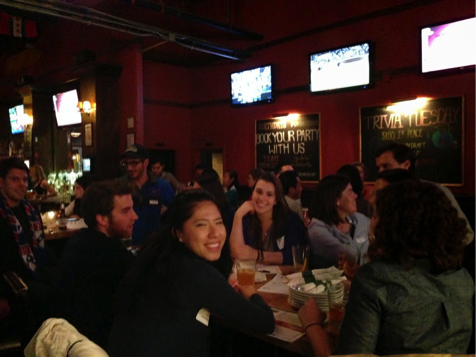 “C’est formidable!” Judith Forman, CW’63, G’66, stated as we exited Lascaux II.  We weren’t sure what to expect with this stop on the Penn Alumni Travel tour of the provincial French countryside.  Our guide, Ms. Elsa Marechal, explained that Lascaux II was a fake cave of prehistoric paintings.  “Ugh!” we all thought.  Here is a tourist trap on what has been an otherwise fantastic trip.

We couldn’t have been more wrong.

Lascaux, the original cave, is located near the village of Montignac in the Dordogne region of France.  One day, in the 1940s, Marcel Ravidat’s dog got lost in the woods.  Marcel found the dog stuck in a hole.  When he rescued the dog he noticed rocks were falling and echoing below the hole.  He took the dog back to the house, grabbed shovels, flashlights, and three friends, returned to the spot, and started to dig.  They soon found themselves in a large shaft that lead to two large caves.  The four friends began exploring, not seeing anything noteworthy until one of the boys slipped and fell on his back.  When his flashlight hit the ceiling he found something extraordinary: about 2,000 figures that were painted 17,300 years ago!  The boys made a pact that this would be their secret hiding place and wouldn’t tell anyone.  Remember, these are teenage boys.  How long do you think the secret lasted?  Three days!

The cave complex was open to the public in 1948 and averaged 1,200 visitors per day: extraordinary numbers for the time.  All the visitors changed the climate in the cave.  Carbon dioxide, heat, humidity and other contaminants were visibly changing the paintings and lichen began growing on the walls.  Thus Lascaux II, a replica of the great hall where the majority of the paintings are located, was built in 1983 so that visitors can view the caves without damaging the original paintings.  The tour isn’t just a replica, it is an EXACT replica of the current cave as they update it every 3 years to reflect the state of the real cave.

Penn Alumni had a terrific tour guide named Dave Cohen who called Neanderthals a modern equivalent of Rugby players!  Lifelong learning continued for our Penn alumni as they dominated the tour by asking thought-provoking questions such as:

“Are any of the depicted animals domesticated?”

“What is the chemical make-up of the paints to make them last so long (the drawings can not be carbon dated)?”

“How were Neanderthals able to understand motion and perspective?” 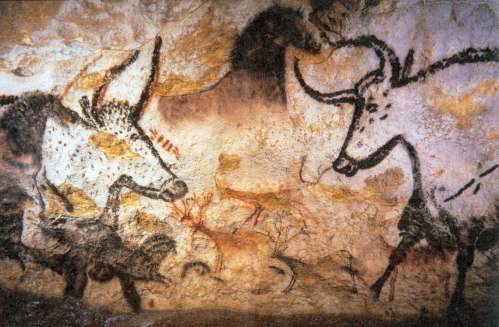 Lascaux is a UNESCO World Heritage Site and the alumni on this trip now understand why.  If you want to find out more information, including the state of the current cave and some of the famous depictions of the images, go to http://www.lascaux.culture.fr/?lng=en – /en/02_00.xml 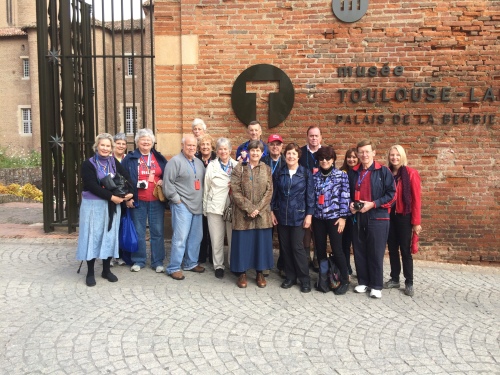 The group poses for a picture in Albi.

[The author and artist, Barbara Seymour, traveled on a Penn Alumni Travel trip to the “Celtic Lands” this past spring. Some people take photographs on tours. Others write in journals. Barbara decided to record the tour in watercolors. Below is a snapshot of her beautiful memories.] 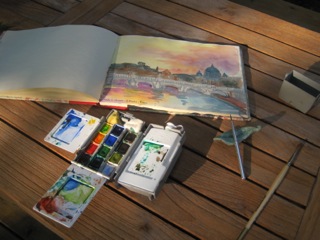 As a watercolor painter, I was so inspired by the Scottish landscapes we saw on the Celtic Lands trip.  Since I live in the woods in the Philadelphia area, the open sky, sea and mountains were a new and challenging subject.  I found myself looking for subjects with all these elements to photograph and paint.

I also loved the changing light and how it affected the landscape, casting shadows over hills and sea.  Clouds became an obsession! 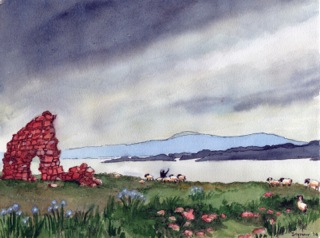 The ruins of an old monastery on the Isle of Iona. (with iris in bloom and shepherd and sheep!) 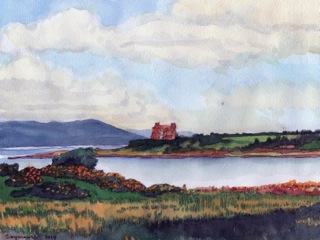 Duart Castle, Isle of Mull (with yellow Gorse blooming in the foreground).

I found a spot on Iona that almost reminded me of home: A tiny little path between fields, with a stone wall. 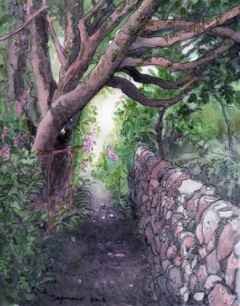 I found this image of an abandoned fishing boat poignant, suggestive of the ravages of time.

Celtic Crosses were everywhere, ancient and new. I also got a chance to paint the little white flowers blooming everywhere in the grass.

Finally, I chose this old stone bridge, with a very challenging stoney river flowing underneath.

Scotland is wonderfully inspiring for a watercolor painter.  I am not finished with it yet!

Join us in October for one or more of the following Alumni Education & Career Networking events!

October 25: If/Then Broadway Show Event
Join Alumni Education in New York City on October 25 at a matinee of Broadway musical If/Then. Afterwards, we’ll have a meet and greet with cast members and show producers (and Penn alumni!) David Stone and Marc Platt. Next, we’ll head to the Penn Club of NYC for a discussion and faculty talk with Penn Professor Cary Mazer and a reception. Tickets are limited, so register today! http://bit.ly/1vTWXcV

October 28: Career Tools Series: Global Opportunities – Students & Alumni Seeking Work Abroad (Webinar)
Considering looking for a job outside of the United States? Participate in the next Career Tools webinar on October 28 when our expert presenter will cover different approaches to considering an international career and review topics such as managing the job search, securing a foreign position, and adjusting to live once you make the move. To register or learn more about this event and other professional development webinars exclusively for alumni, visit http://bit.ly/ZfMSes.