It was already warm at 8:00 am when our twenty Penn Serves LA volunteers showed up at the work site in Downey for our second Habitat for Humanity of Greater Los Angeles project. Shelter is such a basic need that most days we fortunate Penn alumni take for granted. Habitat LA, we learned, has constructed and rehabilitated almost 800 homes across the city since 1990. In Los Angeles, well known for soaring housing costs, Habitat serves people earning 30-80% of the median family income, who work alongside volunteers on the building process. 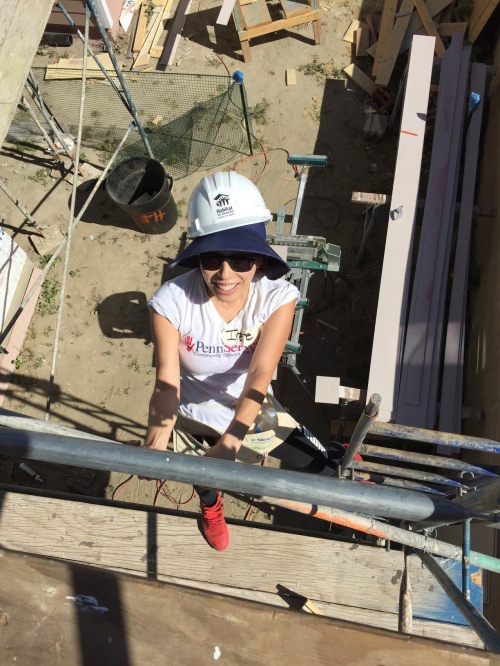 It quickly became clear that we were expected to have a fun day, but also to make significant progress in completing the back of “our” house. Several people spent much of the day on rickety scaffolding, bent in half caulking windows and eaves. Others were busy with power tools; cutting boards, drilling holes, using nail-guns. The dedicated and gifted Habitat staff taught us a host of new and useful skills, and the Penn crowd dove in, like good Ivy League competitors, intent on getting the job done.

It was a very social day, with people chatting while building a window frame or sharing photos while affixing siding to exterior walls. Over lunch the group shared their Penn stories: where they were raised, what they had studied at Penn, how they had landed in LA. Typical of Penn, it was a diverse group, with a broad spread of graduation years, and alumni working in law, medicine, education, social science, business, architecture and more. Our volunteers hailed from all parts of the country, and had traveled from San Diego, the Valley and the Westside Saturday morning to participate in our Habitat build day. 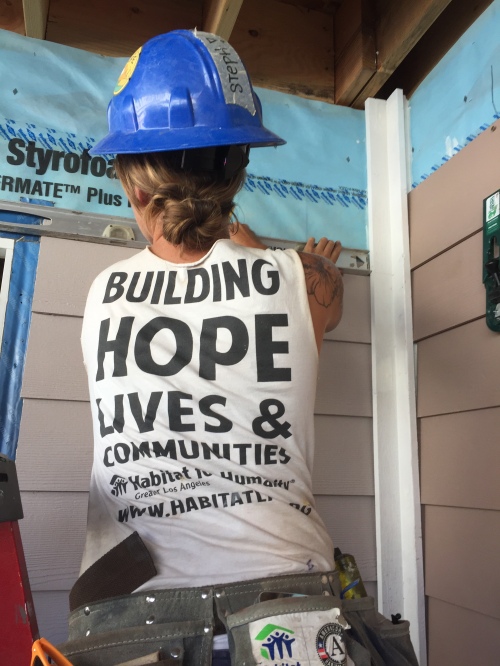 As the afternoon concluded, everyone was smiling and not a single band-aid had been issued – a fantastic success! After a long, dusty day of working with our hands in the hot sun, we felt really good: holes were filled, corners were smooth, siding was level, and the site was clean for the next crew. It was especially meaningful to have Christina working with us all day, as she will be living in the house we worked on. The Penn crowd looks forward to returning to our Downey site for the ribbon cutting on Christina’s completed home.

We have done everything from serving meals to the homeless to restoring the environment to fixing homes. Six times annually, we find another great opportunity to learn about interesting nonprofits, lend a hand and enjoy fun experience with fellow alumni.