Mark it on the Calendar (30 Weeks To Go)

Thanks to classmate Sonia Biswas for sharing these images of the Penn Calendar from our Senior Year that she still has!!

Does anyone else still have their Penn Calendar from our time at Penn? There is a listing in the back of all the events happening in Philadelphia throughout the year.

Inside back cover of the Penn Calendar

Sonia shared the May page from her calendar – the month we graduated from Penn twenty-five years ago!

May 1993 in the Penn Calendar, photo courtesy of Sonia Biswas, C’93

The Marriott Downtown (where we had a Penn 1993 and a Penn Alumni room block) is sold out for Alumni Weekend. There are alternative hotels. We recommend booking ASAP! Please see our class website for additional details.

The Penn Student Directory was a printed listing of all the students at Penn – their campus address and phone numbers. It was published every academic year by Penn Student Agencies.

We managed to track down three of the student directories from our time at Penn.

Rob Williams, C’93, had our first student directory with a beautiful photo of Locust Walk in the Spring.

As you can see from the cover page below, students’ local (Philly) address and phone numbers were listed as well as the home address, expected graduation year and faternity/sorority affiliation. The information was provided by the Registrar. 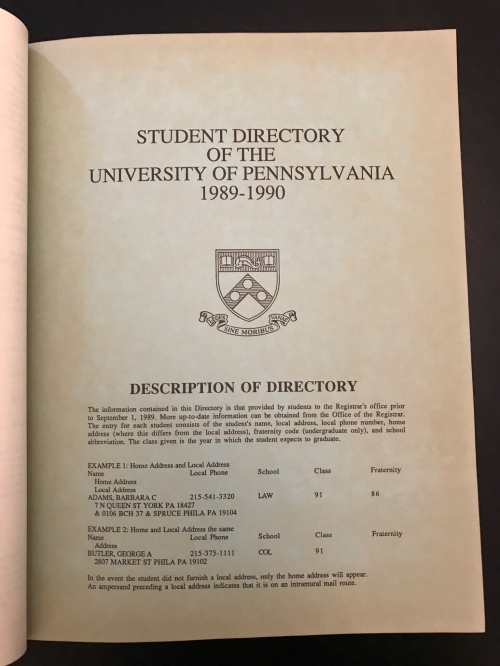 Penntrex – how to use it! Photo courtesy of Rob Williams, C’93

I remember the coupons in the directory – poor college students needed these to save money!

I had the covers from two directories in my stash of Penn things. Here is the one from our junior year. 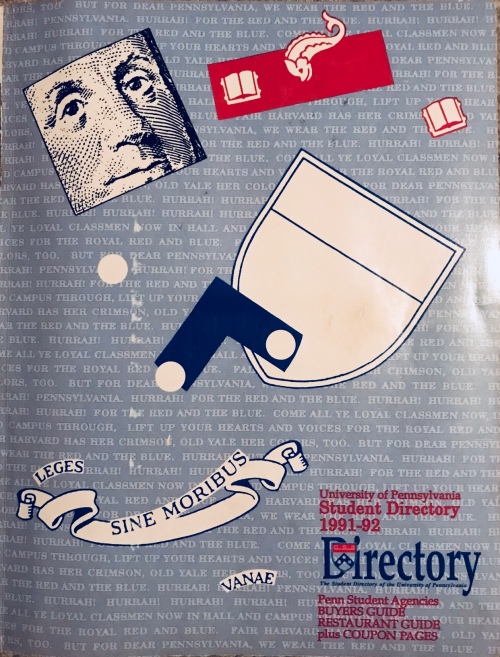 I worked at Penn Student Agencies during my four years at Penn, and the summer between my junior and senior year, I worked in the PSA office.

Since the student directory was produced by PSA, there was a summer staff working on the directory.

Here is a photo of us having fun on the Button.

I remember having many laughs with this crew, and I contacted Chris and Diana to see if they remembered anything specific about our summer working in the basement of Houston Hall (where Penn Student Agencies was located while we were students).

Diana immediately responded with this memory:

I do remember us ruthlessly teasing Jeff, about what I don’t remember. Probably him saying my last name is spelled “H-U-R-O-K” as in “you are Ok, ok?”

I remembered that too – because he’d call to leave his name and say, “H as in Harrry, you are OK.” To this day, whenever I leave a message and have to spell something, I always say H as in Harry and think of Jeff!

I remember thinking while going door to door from business to business “I signed up to do this again?!?” While walking around in 90+ degree heat and 90% humidity!

Chris chimed in and said that we had a lot of targets for teasing, including Publications Director Mo Massel, C’94.

Here are some photos of what we worked on all summer, the student directory for our senior year at Penn. 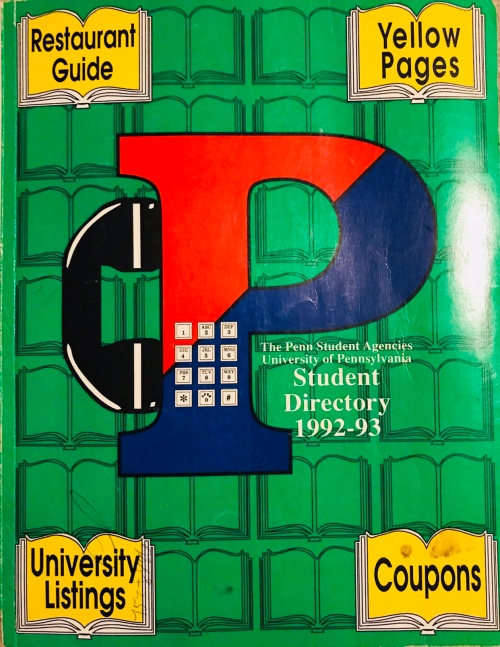 Here is the credits page for the directory with all of our jobs. It was a fun summer!

Looking back at our time at Penn, we are asking classmates to share photos and memories. Little did we know that someone would have a mug that survived from freshman year!

Ruth McIlhenny Gorme sent us this photo of an Underground Cafe mug that she has from our freshman year (the year the cafe opened in High Rise North).

The Underground Cafe mug that Ruth McIlhenny Gorme still has from our freshman year!

Since I lived in Harrison House freshman year, I needed to watch Twin Peaks somewhere and this was the place to watch it in the high rises.

That is right – most students did not have a TV in their dorm room, so once it opened, the Underground Cafe became a gathering spot for watching popular television shows.

I worked at Penn Student Agencies which opened the cafe in January, 1990, and I saved this ad from The Daily Pennsylvanian advertising the opening. 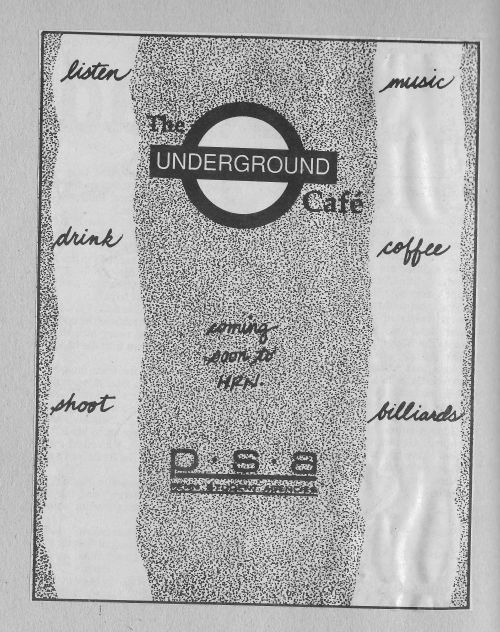 Ad from The Daily Pennsylvanian promoting the soon to open the Underground Cafe in High Rise North. Photo by Kiera Reilly.

This ad from The DP had the tagline, “Everyone Needs a Reality Shelter.” 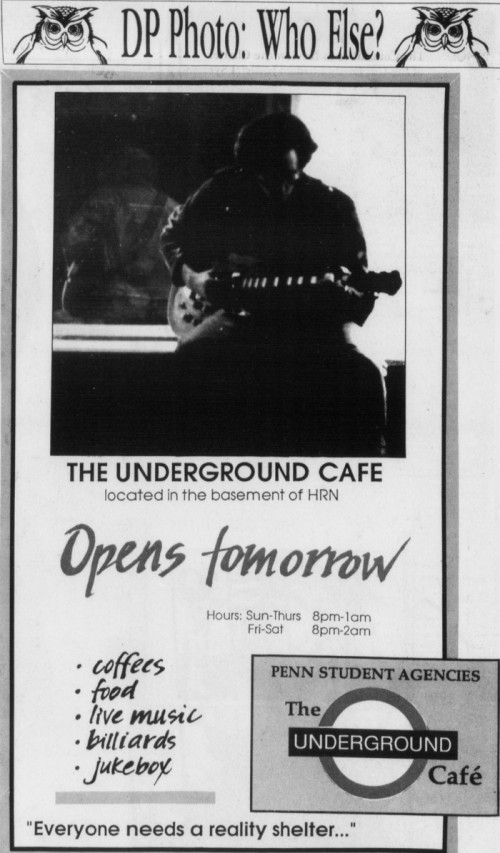 Ad for The Underground Cafe appeared in the January 24, 1990, issue of The Daily Pennsylvanian

Here is the review of the cafe that appeared in The Daily Pennsylvanian on February 2, 1990: 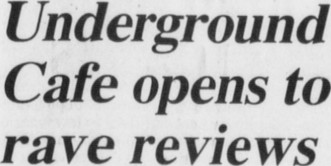 Review of the opening of The Underground Cafe from the February 2, 1990 issue of The Daily Pennsylvanian

Did you visit the Underground Cafe? Do you remember watching a favorite TV show or listening to a student band? Let us know in the comments.

How do we keep track of all these dates and weeks – look ahead to our reunion that is in 2018 and also look back on the things we did last month? With calendars! These days, more often than not our calendars are accessible through our phones or on our computers. There are electronic and online resources galore to note days, weeks and months, appointments, schedules, and meetings, etc. How did we manage when we were students at Penn? Before the internet was really a thing?

I kept track of my day-to-day schedule in the spiral-bound Penn Planner, designed and produced by Penn Student Agencies. And, because I save everything, I went through my box of Penn things and found one of my planners from the 1991-1992 school year! 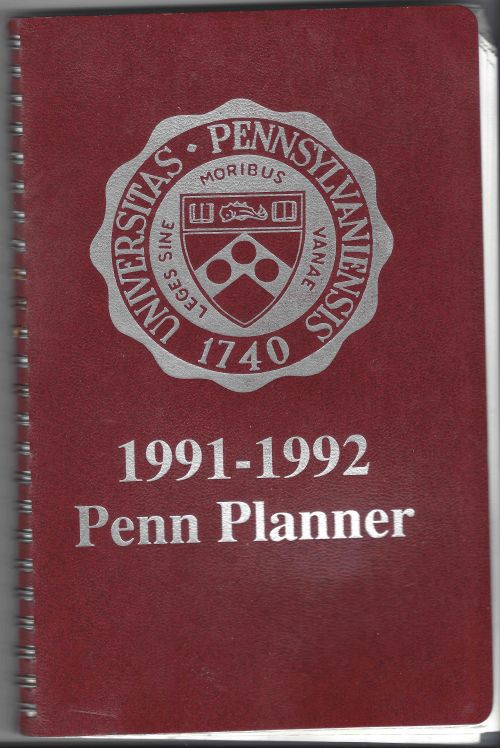 When I opened it up, I flipped through to see what I noted. None of my classes were listed on my daily schedule, which was odd. I marked going to the movies, out to dinner with friends, or  a student performing art group.

You can see my activities for a week in March here. When I flipped through the planner, I found a page at the back for noting my classes. I guess since I went to the same  classes every week, I didn’t need to note them on the weekly schedule. 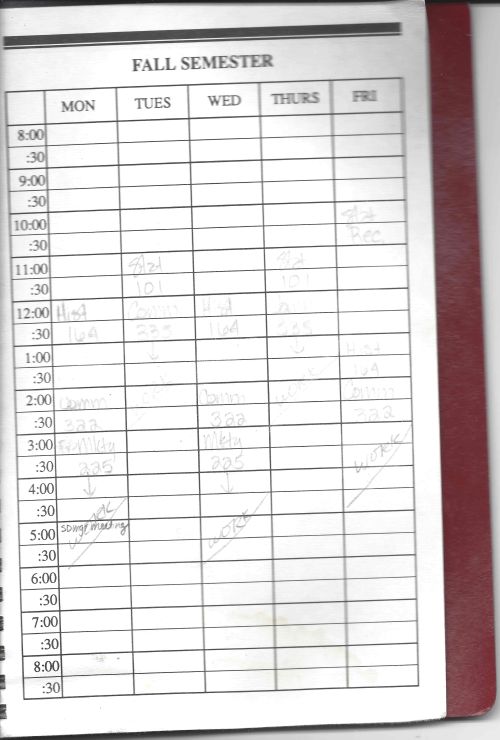 Fall Semester classes noted at the back of the Penn Planner

In the front of the planner, I was surprised to see the students responsible for its production – Belinda Bentzin, C’92, (now Belinda Buscher) and our classmate John Hawkins, C’93!

I asked Belinda and John what they remembered about putting the planner together. Here are Belinda’s thoughts (and John said he agreed with what she said):

I totally remember that! I stayed on campus the summer of ’91 and worked with a team of people to put together the wall calendar and weekly planner, as well as the printed Penn directory. Both were sold in the bookstore, as well as directly to people all over campus. For the planner that year, we decided to select old photographs from the Penn archives and then we laid everything out, with the help of Vince Cipollone, who had graduated in May ’91 but wanted to stay working on campus that summer until he started his “real” job. We probably printed several thousand of the weekly planners. I remember it was a really fun summer job and I rented a room in the Alpha Chi Rho house for the summer. I’m sure I still have a copy of two of the planner lying around and probably the directory and wall calendar, too!

Looking at my schedule from this particular week in March, I saw that I noted the Lea Salonga event with Connaissance. Connaissance invited Ms. Salonga to speak at Penn as she was the then-star of the Tony Award-winning musical, “Miss Saigon,” on Broadway. I found a few pictures from that event. 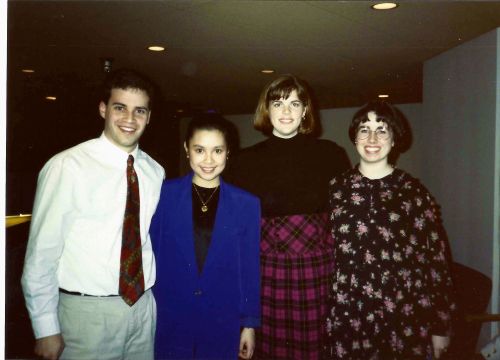 What did you use to keep track of your schedule at Penn? Did you have a Penn planner or a Penn calendar?

PSA is Looking for Alumni

Over in Williams Hall, the men and women of Penn Student Agencies are working hard to serve the Penn community and we love every minute of it.  But there is something missing… a void in our hearts. Where are our alumni?  Where is the man who designed the Penn Calendar in 1994? Who is the woman who thought up the idea of laundry delivery?  Where are the people who spent countless hours working on these small businesses so that hundreds of students would continue to have jobs years down the road?

Alumni, we are looking for you!

Maybe you were a barista, or the manager of Promotional Programs, or maybe you delivered The New York Times to dorm rooms.  Whatever your job, we want to meet you. We want to hear about your experiences and share with you how PSA is now. Perhaps you have some good ideas or tips for our students. 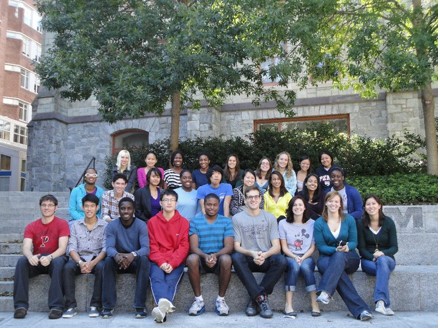 On Friday, November 4, 2011 at 6 PM in Houston Hall, we will have a dinner for all people who have ever been associated with PSA to celebrate the organization and the fabulous people who have given so much to ensure the success of the businesses. We will also be holding a penny (loose change) drive for the non-profit that is near and dear to the heart of several PSAers, Back on My Feet.

If you can’t make the event, please get in touch with us! We’d be happy to send you newsletters and invite you to other events.

All RSVP’s for this event to be held during Homecoming Weekend featuring arts and culture can come directly to me, Ali Berryman (PSA Graduate Assistant) at berryman@gse.upenn.edu.