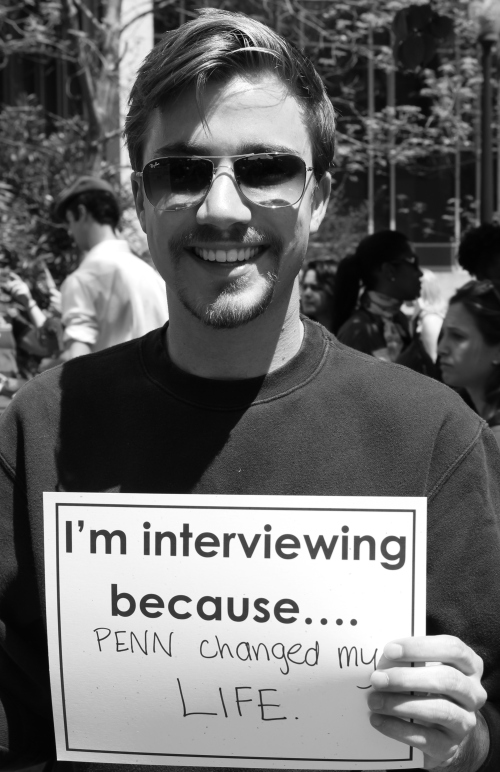 People join the Alumni Interview Program for all kinds of reasons- I’m partial to this 2014 grads motivation. 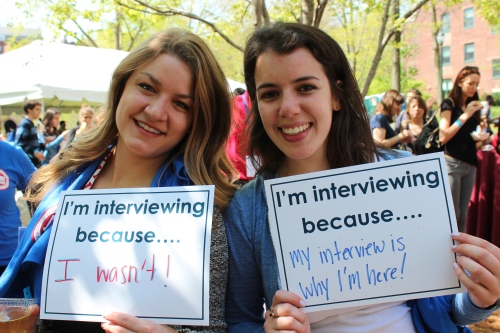 The More Things Change, The More They Stay The Same

Yesterday a friend from Admissions stopped by the Interview Program Office for a cup of coffee during his break from sitting in committee (yes, it’s that time of year!).  As he melted into a chair and took a slug of his coffee, we started to chat about his impressions on reading hundreds upon hundreds of interviews.

What has recently struck J. about interview reports is the ability of interviewers- of all Penn class years and schools- to touch upon those certain qualities that makes Penn Penn, and a Quaker a Quaker.  Interviews took place via skype, phone, and in person conversation all over the world this year- from Dubai to Detroit, from Slovakia to Santa Monica- from alumni ranging in age from 22 to 85.

In 64 years, there have been a few changes at Penn- a transition from typewriters to computers to tablets, the conversion from Penn-specific building to community oriented growth in West Philadelphia, the evolution from weekly letters home to dorm hall phone calls to texts, the creation of Locust Walk as a pedestrian thoroughfare, the full integration of women to the University, and growth through eight different Presidents (among a few other changes- The Arch, anyone!?).

However, what we’re seeing from interview reports is that the more things change, the more they stay the same.  Throughout Penn’s past, a passion for activity both inside and outside of the classroom has remained, along with a desire for growth in knowledge, a hunger for integration, and excitement for innovation.

Over 12,000 of your fellow alumni are discovering students with these indelible Penn qualities from all over the world through interviews- if you’d like to help, join the Interview Program by clicking here, and share with us what you think makes a Quaker a Quaker.

With just two weeks left in the Interview Program cycle, days have been filled to the brim.  However we had a chance to stop and marvel at our amazing interviewers the other day when we received a package from some of our incredible Massachusetts Chairs!

Inside was everything our hungry and sugar-crazed crew could want:  Squirrel Nut Zippers, Neco Wafers, Boston Brown Bread, Fluffernutter Sandwich ingredients and an abundance of Cape Cod Chips.  Many thanks to Shannon Scully, Paula Breger, Mimi Neuman, and Felix Layne, our awesome 85% or Bust Team from the Phillips and North Shore Interview Committees!

Short of smearing blue paint on your face and wearing a kilt, it can be challenging to capture the attention of many, and urge them towards a singular goal.

However, this remains one of my broader goals within my position as Assistant Director for the Penn Alumni Interview Program.  Like much of Penn, the Interview Program is a complex swirling vortex of ideas, passions, data, collaboration, integration, and the slightly wild goal of offering interviews to 100% of applicants.  In order to try and explain this, I decided to test out a (slightly) new free platform called Prezi.

Prezi provides users a blank slate with which to create a presentation that is aimed at capturing the attention of its viewers with its outside-of-the-box options.  For a great example, check out this awesome resume from Prezi all-star Pascal.  Outside the box, right!?  I must admit that ours is a bit more stayed than Pascal’s, but I think (and hope!) it gets out point across.

The Interview Program hopes to offer an interview to each and every one of Penn’s undergraduate applicants by 2015.  Why?  You’ll just have to watch our Prezi to see.

And!  If you find yourself inspired, excited, willing to join, or just plain curious, let me know!  Sign up to interview on our member registration page, or email us.

A benefit of working at Penn (besides the close proximity to Insomnia Cookies) is the opportunity to take free classes at Weigle Information Commons in the Van Pelt-Dietrich Library.

Short and sweet classes are offered there on everything from Excel to Photoshop to Prezi.

Don’t know what Prezi is?  Neither did I, so I decided to take a class in it!

Turns out that Prezi is new alternative to building presentations on PowerPoint that allows for greater flexibility and boundless creativity.  After learning the basics at Weigle from our awesome teacher and testing my prowess on a presentation about corgis, I decided to get a bit more professional and try my hand at a work related presentation.

If you have a minute, check out my “Why Interview” Prezi here. Here is a screen capture to get you interested.

…and if you like it, let me know by signing up to join the Penn Alumni Interview Program!

Summer is here and with it the bounty of our local farmers market!  Every Wednesday, I like to step out of the office and head over to the corner of 36th and Walnut to see the delicious produce.  Yesterday there were perfectly ripe Pennsylvania strawberries, rhubarb, greens, tiny zucchini and an abundance of mushrooms from a new vendor.  Seeing this fresh local produce gets me excited to clean off the grill, step outside, and get cooking!

Greens from the Farmers Market

Though March is now behind us, the Madness is not quite over yet.  This Saturday, the Final Four will face off to see who will go to the finals, and Liz Pinnie will find out if she wins her NCAA pool (it’s looking good people).

Now, I’m all for a little casual March Madness betting.  However, this year my pure enjoyment was a bit spoiled by a discussion we had in my “Diversity in Higher Education” Class (hey, GSE!).  Last week we discussed the ins and outs of Division One Athletics, and I began to realize what a twisted world they have become.

Articles that I read for class reinforce my belief that being an athlete in the U.S. has become an all or nothing proposition.  The focus for Division One Athletes, like the ones you are watching on TV during March Madness, becomes their sport.  If they don’t perform, they don’t play.  If they don’t play, they will often lose their scholarship.  This includes athletes who get injured while playing their sport.  Ever hear of Kevin Ware?  What will happen to him now that he is unable to play?  Forbes wrote an interesting article about this here.

In addition to losing financial support, there is a strong chance that these athletes will lose their sense of self- because their self has been defined by their sport, which they dedicated their lives to.

In collegiate athletics, life becomes a sport, which, for 98% of individuals involved will end when they (hopefully) graduate with a degree.

In thinking about my personal experiences and watching players bring in million dollars’ worth of revenues for their schools during March Madness, it reinforces my belief in two things: One, both parents and their children pursuing the very American dream of playing collegiate athletics need to consider to what end are they participating in the game, because they can be forced from it at any moment.  And two- we need to re-evaluate the experiences of student athletes, and the financial structure that supports (or doesn’t support) them, while they make money for their schools.

As we in the office take in games and root for a victor (and I prepare to win money for my selections), I think it’s important to start thinking about the actual players, and not just the game.  While Temple’s Khalif Wyatt might make the pros (if he continues to perform and stays healthy), what happens to his teammates?  I hope that they have found time to study and are on track to graduate, because now that March Madness is over for them, and their time at school is done, they will need a backup plan.

So there you have it- a bit of a downer, but certainly some food for thought.  I’ll leave you with a portion of Henry Van Arsdale Porter’s poem* that gave birth to the phrase “March Madness”.  It harkens to a time when the game was a game.  Maybe we should work on getting back to that place.

The gym lights gleam like a beacon beam
And a million motors hum
In a good will flight on a Friday night;
For basketball beckons, “Come!”
A sharp-shooting mite is king tonight.
The Madness of March is running.
The winged feet fly, the ball sails high
And field goal hunters are gunning.
[…]
With war nerves tense, the final defense
Is the courage, strength and will
In a million lives where freedom thrives
And liberty lingers still.
Now eagles fly and heroes die
Beneath some foreign arch
Let their sons tread where hate is dead
In a happy Madness of March.

Well folks, interviewing season for the Penn Alumni Interview Program has wrapped up, and we couldn’t be more thrilled with our inaugural year in Sweeten.  With the help of our fabulous volunteers and supportive co-workers (and lots and lots of coffee), we have managed to have a red letter year: over 22,100 applicants were offered interviews in all fifty states, as well as 123 countries.  We have over 2,440 new members, as well as ten new Virtual Interview Committees.  Interviewers have spent over 5,600 hours in Starbucks across the world and our longest participating interviewer just hit the 50 year mark! There is now a new Portal, our fancy new website is in the works, and trips are being planned to all corners of the earth to spread the interviewing word and provide training.

What does this mean?  This year, all over the world, Penn graduates and talented teenagers met to talk about Penn, and along the way had fascinating conversations about everything from Kafka to Cambodia, Fruit flies to Freakonomics, baking classes to Engineers without Boarders.  These conversations mean that more alumni are being engaged than ever before, more applicants have the chance to speak with an ambassador from Penn, and unique ideas and thoughts are being shared across generations and boarders.

One of our awesome chairs sent us the most giant fortune cookie ever- thanks Felix!

While this has been a wildly successful year, we here in Interview Program Headquarters are not ready to rest (yet).  There is still (a lot!) of work to be done both on our end, and yours.  If you would like to help spread the word about Penn as an ambassador and member of the Penn Alumni Interview Program, please just sign up here.  If you are already a member, spread the word- we want to keep this momentum going to make this experience, for our alumni and prospective students, the best it can possibly be.