The weekend of January 13-14 marked 69 weeks until our 25th reunion in our #93tothe25th countdown. This week we thank Ruth McIlhenny Gormé, C’93, for taking us on a trip down memory lane, seeing how far Penn has come since our Freshman year.

As you may remember, Penn celebrated its 250th Anniversary in the Spring of our Freshman year, and the celebrations continued into the Fall of our Sophomore year with the final celebration taking place on College Green in December, 1990 (see our 74 Weeks post on that celebration here).

In conjunction with the celebrations was a capital campaign for Penn dubbed, “A Billion for Ben.”

Ruth still has the tote bag from those celebrations and uses it regularly – see it here in the back of her car. I had one of these bags too, but it is in no shape to be photographed. 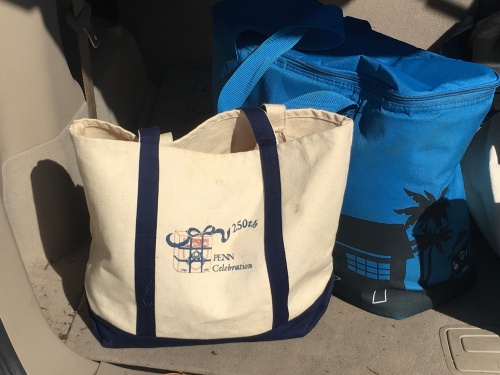 Ruth writes, “I’m sending a picture of the tote bag I got working on the “Billion for Ben” campaign our freshman year.  It’s still in use! Remember when a billion dollar endowment was something to strive for? What’s Penn’s endowment now? According to a June 2016 report, it’s now over $10 billion!”