On February 8, 2017, several members of our class spent the evening together in Midtown Manhattan as part of a group of 50 volunteers supporting the clients of Upwardly Global, an organization which helps highly skilled new immigrants embark on their American job search. Jackie Einstein Astrof, Brett Barth, Jennifer Bernstein, Jennifer Jarett, Heather Pavell and Ralph Sutton also participated in the event planning committee. Other members of the class who participated were: Todd Aronoff , Valerie (Broadwin) Mutterperl and Walt Piecyk. 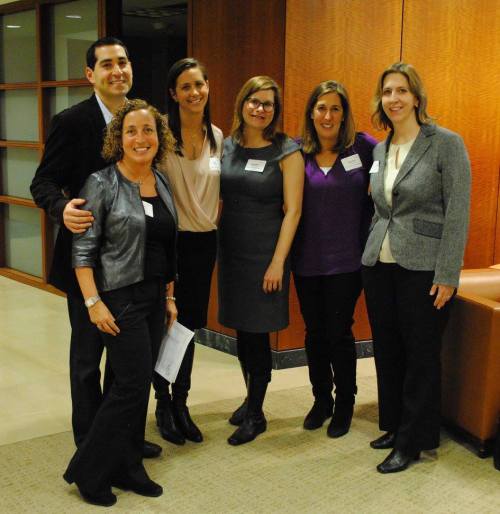 Volunteers worked with 18 new immigrants from 18 different countries, conducting mock interviews and networking exercises. As depicted in the photo, the room was full and loud. Volunteers literally “leaned in”, so engaged in their conversations.  At the end of the evening there was a full group debrief which provided many good ideas to the job seekers. Several volunteers even noted that they gathered some good advice to apply to their own job searches. Kudos to our very own Valerie (Broadwin) Mutterperl who was especially helpful in identifying several tips for job seekers.

A full room for the PennPAC event in New York.

Walt Piecyk found the event to be a “good use of time to give back and help some people if even just a little bit”. Another participant felt that “it was inspiring to see what the job seekers are doing; it felt good to be able to help and was nice to do it as a Penn community. I also really enjoyed learning about UpGlo and PennPAC.”

The event was co-hosted by the Class of 1993, the Penn Club of NY and PennPAC (Pro bono Alumni Consulting.) PennPAC brings together alumni to support nonprofits in New York, Philadelphia and Silicon Valley. This “ImPACt” event is a signature PennPAC event, occurring 2-3 times per year. PennPAC offers alums volunteer opportunities throughout the year. Visit www.pennpac.org to learn more.

The Daily Pennsylvanian covered the event in their Feburary 9, 2017 issue. You can read the article here. 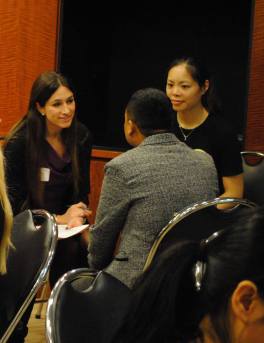 As most of you may know, February is a very special month for seniors at Penn. The first of the February marked the beginning of a month long slew of different social events every day for the class of 2013, also known as Feb Club. Most of the senior class sees it as an opportunity to bond with classmates they otherwise would never interact with one final time or as a way to get free or discounted stuff. I, however, saw Feb Club as a rite of passage. I had been looking forward to February 2013 approximately around my spring semester junior year. I knew that it would take a lot of determination, time, and energy to attend every event but I was dead set on winning.

So, on February 1, I trekked down to XFinity Live for the kickoff event with my best friends and began my Feb Club journey. Every senior was given a Feb Club card, graciously donated by the Penn Club of New York, in order to mark how many events they had attended in order to tally prizes. If one made it to every event, they would not only win the entire assortment of prizes, they would also get their named engraved on a special plaque at Smokey Joe’s, the extremely popular “Pennstitution” that most seniors attend on a regular basis to grab drinks with friends and classmates.