Vietnam on Locust: The Peace Symbol Statue & History of the Vietnam War on Penn’s Campus 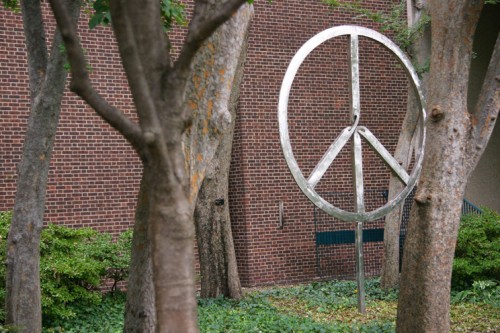 As one takes a stroll through Penn’s campus, one can easily notice the variety of public art on display across campus. From the notable LOVE Statue to the Covenant on 39th and Locust, it’s clear that Penn has devoted time to the beautification of campus. However, we don’t always consider the context and history of some of these pieces of art as we walk hastily down Locust. In particular, one piece of art that remains almost hidden from the sight of students is Robert Engman’s 1969 Peace Symbol standing in front of Van Pelt Library. At first glance, we wonder what significance it has, but one would soon discover the piece’s history as related to the university and the Vietnam War.

But first, it would benefit us to learn a bit more from the sculptor. Robert Engman was born in Belmont, Massachusetts in 1927 to Swedish immigrants. At the young age of 15, he joined the US Navy and served in the Pacific theater of World War II. After returning to the US, he received his BFA from the Rhode Island School of Design and later, his MFA in Painting and Sculpture from Yale University in 1955. It wouldn’t be until 1964 that he would become Penn’s Director of Graduate Studies in Sculpture and until 1974 that his now familiar piece, Triune, would be found across City Hall. However, it was in 1969 that he, alongside eight Penn students, would install the sculpture, Peace Symbol, an emblem of student protest against the University’s lack of a stance on the Vietnam War. 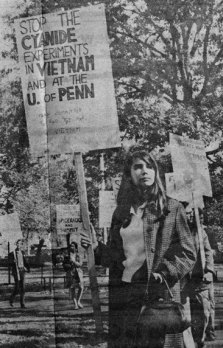 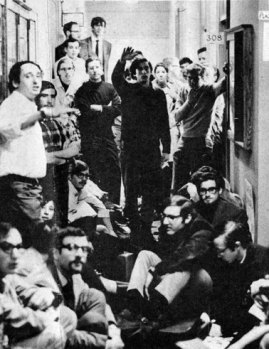 Now, you may ask yourself, what was the stance of the university? Well, as many college campuses had done, Penn’s students and faculty began to hold various protests against US policy in Vietnam. Efforts emerged around campus such as in April 1965 with posters urging students to join the Washington March or from April 8-15, 1967 when Vietnam Week was held on campus. On June 5, 1966, sixty-seven Penn faculty members signed a nationwide petition urging the government to stop its policy in Vietnam. Nevertheless, protests against Penn would begin as a reaction to two things: Penn’s involvement with the Dow Chemical Company, the principal supplier of napalm to the Department of Defense, and Penn’s “bacteriological warfare unit.”

On one hand, students would challenge Penn’s connection to Dow with protests held in early November 1967. At a recruitment effort with Dow and the CIA, eighty protesters would line the hallways of Cohen Hall in a sit-in meant to disrupt recruitment efforts which it eventually did. On the other hand, students once again rose to protest against allegations that the university was involved in a top-secret bacteriological warfare unit. On October 15, 1965, students would protest outside the Institute for Cooperative Research (ICR), the alleged unit, which led the university to admit it’s research in biological and chemical warfare was being done from a defensive standpoint. Protests would again emerge against ICR on October 1966 at Houston Hall, and the university would report that ICR was disbanded even if President Gaylord P. Harnwell stated it had no connection to warfare.

Ultimately, the university would still maintain their lack of a stance with regards to the war. Arguments presented at the time spoke of institutional morality and whether the university even wanted to engage with national policy. Nevertheless, even though the university never adopted an official stance, other organizations and student groups continued their efforts. Whether it was the Graduate Students Association who called for an immediate withdrawal of forces, the Vietnam Commencement in 1969 which saw students and faculty commemorate 1969 graduates who were expected to die in the war or anti-war protests at the 1972 Hey Day, it was clear that Penn’s campus was exercising their right to protest in a tumultuous time in America’s history. 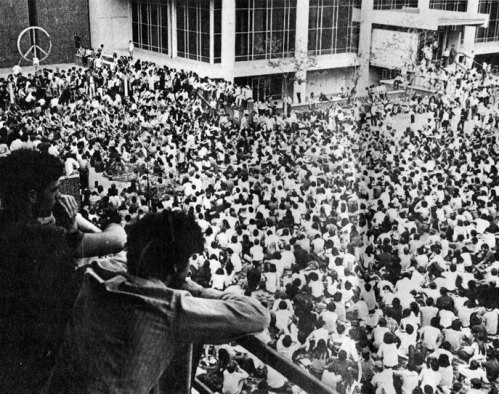 Protests would continue until the end of the war in 1975 and mark a finale to the wartime dissent on Penn’s campus. From this time, the Peace Symbol would remain in front of Van Pelt as a representation of the opposition of Penn students and faculty and a focal point for the gathering of students in protests. While the sculpture would be the site of the tragic suicide of Kathy Change, a political activist, in 1996 meant to send a message against violence, it remains as a reminder of politics on Penn’s campus. Even though its history is riddled with unrest and violence, it’s important to see it as a reminder of the necessity to respect and promote the namesake of this piece of art.