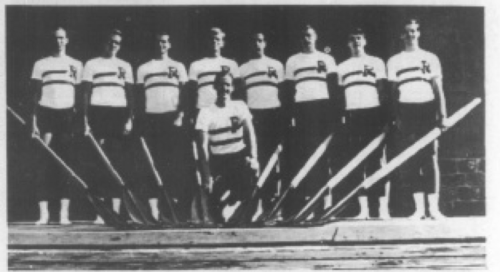 There are few superstars in a University eight oared shell. Some oarsmen may be better in some ways than others but all have to pull together in great precision to win a race let alone a national championship. In the fall of 1967 the Pennsylvania Heavyweight Crew came from the previous season with great optimism having won the Intercollegiate Rowing Association Championships the previous summer on Lake Onondaga only losing the JV race due to a freak storm that came up during the race.

The members of the University of Pennsylvania Class of ’68 who were members of the Penn Heavyweight Crew returning in the fall of 1967 were David W. Carroll, W’68, Stephen A. Cook, C’68, Austin E. Godfrey, C’68, Francis H. Gehman III, W’68, Michael M. Howard, C’68, Nicholas H. LaMotte, C’68, WG’72, Henry H. Livingston III, C’68, Philip H. McKinley, C’68, and William K. Purdy, C’68. The Penn returning seniors and underclassmen were considered the favorites to repeat a national championship and perhaps represent the United States in the 1968 Olympics in Mexico City. Penn had always had a long and venerable rowing tradition. For years now college oarsmen from any class may be in the varsity or JV boat whereas in 1968 we had a separate freshman boat that competed against other freshmen teams. In 1967 Penn had a superb freshman coach Ted Nash, who had won the gold in the four without coxswain in the 1960 Olympic Games in Rome and then bronze in the four with coxswain at the 1964 Olympic Games in Tokyo. Ted had begun his coaching career the year the ’68 oarsmen were freshmen and thus spent a year coaching sequentially the ’69, ’70, and ’71 oarsmen who made up the ’68 crew. Ted was a very enthusiastic coach firing up our imaginations and often reminding all of us that this was an Olympic year and we should chase that Olympic sweatshirt all the way to Mexico City. 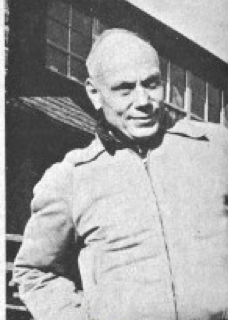 Our varsity coach Joe Burk, with whom the seniors, juniors and sophomores spent countless hours on the Schuylkill averaging about 100 miles each week, was the Sullivan Award winner for the best amateur athlete in the U. S., Diamond Scull winner at the Henley Royal Regatta and a World War II PT boat hero who had won the Navy Cross. He rowed for Penn and was Varsity captain. He was a man of few words, kept himself in great shape, always in control, and tough as a titanium rigger. When he asked us to row 24 miles in practice, as we did on Saturday mornings, We never doubted that at 55 he was perfectly capable of doing so in a single perhaps even at a faster pace and certainly at a higher stroke rate than we could. By the calculations of Reed Kinderman, class of ‘67 who is Joe’s unofficial biographer, the ’68 Varsity crew rowed over four thousand miles on the Schuylkill in practice during the fall of ’67 and the spring of ’68.

Our race lineups were based on a demonic random system of employing playing cards with each rower’s or coxswain’s name on a different card. The cards would be shuffled and dealt making up 3 practice boats. Points earned in inter-squad races during practice determined the intercollegiate race boat lineups. Oarsmen had the opportunity to move up if they were in boats that won practice races or down if they lost. Therefore theoretically any member of the crew could be in the JV’s or Varsity at any race. This separated the racers from the rowers and identified those oarsmen who were improving, or not, more readily.

In 1968 the freshman crew swept away all adversaries. The JV crew who had lost to Harvard in a dual meet came back to beat them in the Eastern Sprints and the Varsity lost only to Harvard. In June 1968 the Intercollegiate Rowing Association Championships again took place on Lake Onondaga. This year it was a 2000 meter race, the Olympic distance, instead of the 3 mile race the previous year. Penn was ready. Again the freshmen triumphed, and this year, without a storm to stop the JVs, they almost coasted to their victory. It was the Varsity’s turn. Coming off the start at 44 strokes per minute we were well ahead but fell back. Slowly over the next 1500 meters we steadily pulled up on the lead boats and passed them winning by a half-length of open water over the second place Washington University Huskies.

Since Harvard and Yale had their special race on the same weekend as the Intercollegiate Rowing Championships the question was raised as to who should represent the United States in the 8 oared shell competition in the Olympics in Mexico City. An Olympic Trials was arranged between Penn and Harvard in Long Beach California later in the summer. The lineup in the Penn boat was changed hopefully to increase its speed by displacing myself and another senior oarsman, Nick LaMotte, who had been drafted the day of the national championship IRAs but thanks to the efforts of Joe Burk was able to return under the Army sports program. We were replaced with two underclassmen, Luther Jones and Gardner Cadwalader. The Olympic Trials Race was held under perfect conditions with both boats bow to bow rowing hard down the course. The only way of telling who won was the photo taken at the finish. After some deliberation it was declared that Harvard won with less than a 4/100s second lead over Penn, the length of the bowball.

After the loss in the eights, several of the members of the Penn crew decided to continue training and try out for the small boat Olympic Trials several weeks later. After training in a 4 with coxswain a group of our own  Penn superstars, Luther Jones ’71, Bill Purdy ’68, Tony Martin ’69, Gardner Cadwalader ’70,  and coxswain John Hartigan, an alumnus coxswain (Penn ’63), won the Olympic small boat trials. They represented Penn extremely well in the ’68 Mexico City Olympics making the finals but coming up short of a medal. Indeed 1968 had been an extremely good year for Penn Heavyweight Rowing. 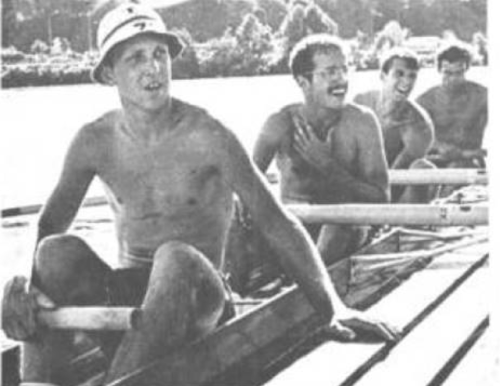