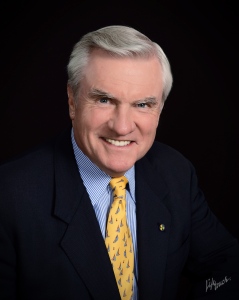 This half-century of remembrance is especially poignant to me, because it’s also the celebration of the golden anniversary of my marriage to Pricie Hemphill.  She was in the class of ’69 but graduated in ’68 at the end of the first summer session, so she can claim membership in our class as well as the one behind us!

My years at Penn were both a lot of fun and instrumental in setting me on my life’s course in communications.  One of my main non-academic interests upon arriving at Penn was broadcasting, so I became an announcer and talk show host on WXPN, which was entirely student-run at the time.  My father had been a director in radio, television and the theatre, and that may have been what whetted my appetite.  Some may remember a TV commercial I did for Wildroot while at Penn.  It earned me enough money to marry Pricie in December of our senior year!

At Penn I entered the NROTC program, and when commissioned an officer in the Navy, I was assigned to the office of the Chief of Information in the Pentagon.  There I did a daily radio news feature on the Navy’s activities in Vietnam and announced a couple of Navy training films. Upon leaving the Navy, I landed a job with CBS Radio in New York.  I wanted to be on the air with WCBS Newsradio, but took a job in sales instead, thinking that once I was in the company, I’d make the move to an on-air job – a move that never happened because I found sales so rewarding. When we were in New York, Pricie joined Citibank and quickly rose to become one of its first woman officers.  CBS then transferred me to a sales management job back in Philadelphia, where Pricie and I became season ticket holders for Penn football. She joined Scott Paper and soon became Assistant Treasurer and eventually the company’s first woman Vice President.  I did a few more TV commercials along the way, and after about 7 years with CBS, I became President of a small advertising agency. We moved to West Chester and had two children, Jeannie (Penn 1996) and Colin (Wheaton 2003).  I sold the advertising agency and began twenty years or so of entrepreneurial ventures, the common thread of which was communication. I also became politically active, joining the Republican Committee of Chester County as a precinct Committeeman.  In 1995, I was elected Chester County Commissioner, where I served for eight years, four as Chairman.

After leaving office at the end of my second term, I founded a conservative public policy organization called Let Freedom Ring, which I continue to lead on a full-time basis. I have appeared around fifty times on TV, mostly on the cable news channels like Fox News, CNN and MSNBC, and hundreds of radio talk shows around the country. I created and hosted a weekly radio talk show on WNTP in Philadelphia called Conservative Solutions and appeared for several years as a regular on Monday Morning Match-Up on Chris Stigall’s show on WPHT. I’m also a regular commentator on American Radio Journal, syndicated on over 200 small radio stations in 45 states.

I’ve now embarked on what is undoubtedly the most ambitious project of my life: a full-length dramatic film of the life of Frederick Douglass, intended for theatrical release. My team includes one of most-respected biographers of Douglass, Dr. C. James Trotman, the great-great granddaughter and great-great-great grandson of Frederick Douglass, a former Hollywood studio CEO and a 1968 Penn classmate: John Altman.  2018 will be the bicentennial of Douglass’ birth, and we hope that the attendant publicity will make the film especially timely.  That’s to say nothing of how much 21st-century America needs to learn from the story of this great 19th-century American hero.  If the project stays on track, it’ll be something to talk about during our reunion film conversation.