Penn Alumni: Where are you watching the World Cup?

Earlier this week, we encouraged Penn Alumni in Argentina, Brazil, Germany and the Netherlands to tweet using the hashtag #PennWC14 during the World Cup semifinals games. We were excited to see alumni respond – from Buenos Aires, Brazil, the Netherlands and Romania! You can read the twitter stream from our interactions in a Storify story here.

The World Cup isn’t finished yet though- Brazil faces the Netherlands on Saturday to see who will finish in third place, while on Sunday, Germany and Argentina play for the ultimate prize.

We know many of you will be watching. Tweet us again using our special World Cup hashtag #PennWC14 – share photos of you and your friends in your team’s jersey and of your local viewing party. Tell us where you’re watching the game, and tell us who you think will win!

Will the winner be

Argentina: Look up: Albiceleste is all you see  OR  Germany: Efficiency is synonymous with Die Mannschaft.

For third place, will it be 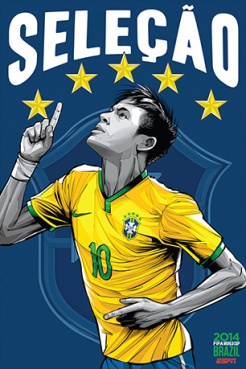 Brazil: To be the best, you must beat the best  OR  Netherlands: The Oranje Army is coming for you.

Brazilian artist Cristiano Siqueira was commissioned by ESPN to create unique posters representing each of the thirty-two teams in the tournament. The posters of the four remaining teams are above, but you can see all the team posters here.