The Penn Alumni Club of Philadelphia recently decided to switch from a Facebook group to a page. I remember when Facebook first started Groups. They were only open to members in the same network, and there was no such thing as “liking.” I was a member of groups such as “John Doe’s Fan Club,” “Penn 08,” and “I went to public school….” I have no idea why John Doe had a Facebook group devoted to him, or why we were talking about public school, but it was cool. When I moved to Penn, I created a group for Penn students from Nevada, so I could meet everyone else from my state. I’m pretty sure there were only 15 of us in the group. Our group photo was the Nevada state flag. Oh, and be sure to pronounce Nevada correctly.

Fast forward several years and groups are a thing of the past. Pages are all the rage. Facebook has changed a lot since I joined in 2004, but I do like the new cover photo feature. Who can resist this awesome photo of Ben on the Bench? Like the Penn Alumni Club of Philadelphia here! 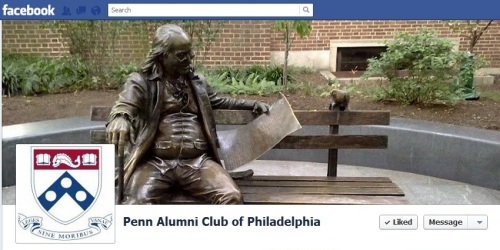