The Academy Award Ceremony on Sunday has stirred discussion around the importance of watching cinema on the big screen. This is in part a self-preserving strategy by the movie industry, concerned with the fall in movie ticket sales and their dwindling budgets, but it also points to the idea that the experience of watching a movie in a theater is inherently different than watching it on a computer, a TV or iPad.  The significance of the shift from watching cinema in the theater to the living room, airplane, and anywhere you can take a mobile device, has been an ongoing area of research and debate among cinema scholars.  It is a subject that brings up questions of ideal spectatorship, visual and auditory immersion, and audience participation.  Obviously, this is a topic too vast for me to tackle in what is supposed to a pithy blog post.  So rather than try and summarize an entire body of research, I will bring it back to my own experience.

Last week I attended the first screening of the Penn Humanities Forum film series “Adaptations” and was reminded of why I love to watch cinema in a theater. The film was Jean-Luc Godard’s 1963 Contempt, projected from a 35mm print in the unusually wide Cinemascope aspect ratio. 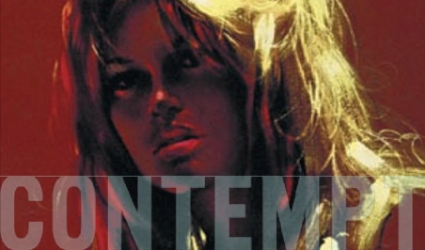 As described in the program, “Contempt (Le Mépris) stars Michel Piccoli as a screenwriter torn between the demands of a proud European filmmaker (played by legendary director Fritz Lang), the crude and arrogant American producer (Jack Palance), and his disillusioned wife Camille (Brigitte Bardot), as he attempts to doctor the script for a new film version of The Odyssey.”  The film, typical of Godard’s style, was layered with commentary and innuendo, making the narrative at times inaccessible and difficult to watch.  And for all of these qualities of the film, I was thrilled to be sitting in a seat, surrounded by other viewers.

Together we were awed by the rare chance to see a 35mm film in Cinemascope format, with the scratches, hairs and depth of resolution that came with it.  And when Fritz Lang referred to the Cinemascope as not  ideal for shooting a story but better suited for showing snakes and funerals, the audience had a level of appreciation that would not be possible on a small screen.  And in those moments when I felt completely and utterly bored, restless, aching to get up out of my seat, the presence of the others kept me there.  Sure, I could have stood up and walked out, but the thought of disturbing a room full of attentive people who seemed stronger than I, kept me in my seat and glued to the image on the screen. To be completely honest, I don’t think I would have made it through the entire film if I were watching it on Netflix.

I embrace new technology and feel the film industry needs to adjust to changes in models of viewership, however, I do feel there is something unique and special about theatrical screenings that needs to be preserved.  I am grateful to the Penn Humanities Forum, the Cinema Studies Program at Penn and other advocates of cinema for doing so.

Filed under Film, Lisa Marie Patzer, The Arts, The Arts at Penn, Uncategorized