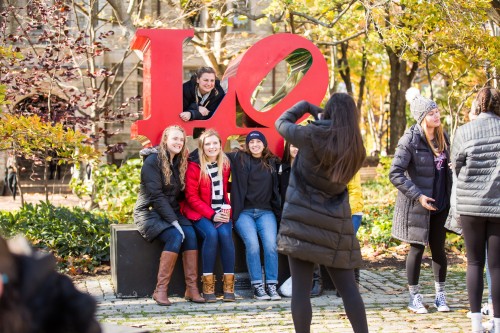 When the growing chills of late November begin to settle on campus, one of the most celebrated traditions of colleges and universities across the US arrives Homecoming. Homecoming is the tradition of welcoming back former students to celebrate their time at their universities or colleges. While the tradition has existed since the 19th century, Penn didn’t actually officially adopt Homecoming celebrations until 1984. Nowadays, as many of you, as alumni, will know, Homecoming has become one of the staple events for alumni on campus alongside Alumni Weekend in the spring. Homecoming at Penn, though a tradition shared with any other university or campus, has its own flair that is very uniquely Penn. Events like the Homecoming Game and the Penn Alumni Award Gala have become great events to showcase the dedication of alumni. So, the question is: why is Homecoming at Penn unique? And, what are events like the Homecoming Game and Penn Alumni Award Gala like?

First and foremost, it is important to consider where Homecoming at Penn started and why the story behind it is so interestingly Penn. After a chat with Director Mark Frazier Lloyd of the University Archives, I was able to hear about the history of Homecoming from a true Penn enthusiast. In its simplest form, the story of Homecoming traces back to Penn’s undeniable love and excellence in football from the 1930s to the 1950s. During this era, there was no denying that Penn was a big-time intercollegiate football power. The mere success and fame of alumni like Chuck Bednarik, or “Concrete Charlie,” who would later go on to play for the Philadelphia Eagles and help the team win the championship shows the general euphoria felt around football. All this to say that Penn had definitely built its reputation around its football excellence. While students officially began their participation in intercollegiate football in 1876, it was common for students to have played football on their own on campus and it began to make official publications as early as 1872. With this interest in mind, Penn would play their first two intercollegiate matches against Princeton and would, unfortunately, lose both games. Though the football team would lose about one half to two-thirds of their games in the beginning, the team would grow in skill through the 1880s until they got much better during the 1890s and under the coaching of George Woodruff. The rest is history! But, interestingly enough, this prowess in football would be challenged by another part of Penn’s identity that many hold dear, its status in the Ivy League.

In 1954, President Harold Stassen would sign the documents that would commit Penn to the Ivy League. In order to meet the general prestige of the Ivies, President Stassen declared that Penn would no longer give athletic scholarships because the Ivy League would not allow these scholarships to be awarded. Soon after, Penn’s football would go on to lose many of its games as the same amount of resources weren’t dedicated to football as they were before. Understandably so, this decision caused a lot of backlash with alumni who had lived through Penn’s glory days of football and were constantly drawn back to Penn’s campus by football in particular. With this backlash, alumni affairs employees would begin to lead a conscious effort in the 1950s at increasing alumni presence on campus after the dominance of football wasn’t felt as strongly. With ideas of the alumni affairs team, the event that is Homecoming eventually came to be. In essence, Penn Homecoming became a way to attract alumni back to campus in the hopes of doing it the way football did. Additionally, once Penn had lost its edge in football, there was something that alumni needed to be proud of when it came to their university. While I am still an undergraduate myself, I could only assume that, once we leave the cobblestones of Locust, alumni involvement with Penn is much different than when we’re here. For this reason, an event like Homecoming came about to draw people back and also provide something to be proud of as Penn would grow in status and achievement through the years and up until now.

With this history of Penn’s Homecoming in mind, we can take a look at Homecoming in 2018 and how certain events continue the spirit of the initial versions of this celebration. In particular, one event that I’d like to shine a light on is the Alumni Award of Merit Gala. On November 9, the University honored the work of six distinguished alumni in a variety of fields. Fortunately, I was able to attend and see the recognition of these individuals while chatting with other alumni that came to this event. With regards to the six, the variety of fields is apparent as there was an award-winning, best-selling crime novelist, an entrepreneur who launched a website called myfirstpaycheck.com to help young professionals and many other professions. Alumni from classes of ‘65, ‘76, ‘78, ‘81 and ‘06 were recognized for their individual achievements. What united all of these alumni, however, was the fact that they have all been constantly involved with Penn whether that’s participating on a Board of Trustees or leading various projects as directors. Throughout the ceremony where each one of them was recognized, I could feel the pride that they felt for Penn come through in their speeches. This pride exists so strongly that generations of these alumni and their families have been involved with the university. Being able to witness all of these alumni and even talk to others who weren’t being recognized as an extremely interesting and inspiring night for me. After this event, that pride that Lloyd spoke about in our chat really came through as all the alumni were jubilant to be back on campus. With props rightfully due to the Alumni Relations office, it is undeniable that the pride that was once sought after the loss of football is definitely still thriving through events like this at Homecoming.

Hopefully, this quick overview of Homecoming and the tangible pride that alumni have when relating to the university allows everyone to consider their own time at Penn. Though many who graduate from Penn go on to do amazing things in the world, alumni affairs will always welcome alumni from far and near to celebrate and have some pride about the university. As Mark Frazier Lloyd said, “Homecoming has risen to today’s wonderful compilation of events from this deep feeling of losing contact with many thousands of alumni because big-time football was gone.” Luckily, Homecoming is only getting better and will be here for years beyond us.