My Penn Path: An ISP Journey

As someone who graduated from high school in a class of seventy, entering the community of nearly ten thousand undergraduates at Penn was certainly daunting. However, I was fortunate enough to be admitted to the Benjamin Franklin Scholars Program, which, as a student in the College, meant that I would spend my freshman year in the Integrated Studies Program (ISP). ISP is a fully immersive first year experience at Penn, in which a cohort of eighty students lives together in the Quad, takes two rigorous courses together each semester, and works to integrate the material from these two separate courses both inside and outside of the classroom. First semester, our course load consisted of Art History and Religious Studies. We spent time discussing the intersection of the two disciplines through weekly lectures, seminars, field trips, and conversations in the Quad. The courses also enabled me to explore my new home in Philadelphia, through frequent trips to the Philadelphia Art Museum and SEPTA rides to Mormon, Buddhist, and Masonic Temples. As a Cognitive Science major, I enjoyed second semester as well, in which we took Evolutionary Psychology and Philosophy. 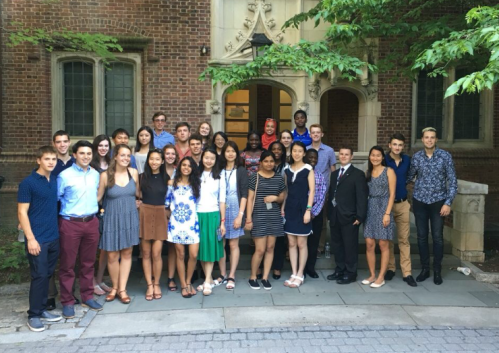 ISP was the hallmark of my freshman year, and it shaped my path at Penn in ways that I could never have imagined. For starters, it exposed me to subject areas that I had absolutely no experience with, and it forced me to venture out of my academic comfort zone. Every day, I was having conversations that allowed me to think abstractly and forge connections between seemingly disparate (and largely new) areas of study. I was challenged, I was engaged, and I was working hard but enjoying it all. Furthermore, ISP introduced to me the idea of interdisciplinary learning, which would come to be defining of my major and minor choices. I went to a magnet science high school, where the closest that we came to interdisciplinary learning was taking biology and chemistry labs at the same time. Because of ISP, I recognized that distinct disciplines spanning the humanities and hard sciences could benefit from collaboration. Now, I am pursuing a Cognitive Science major, but with an independent concentration that I created in Neuroeconomics. I spend my days studying the intersection of neuroscience, economics, and marketing for my major, along with statistics and psychology for my minors, all with the goal of better understanding consumer behavior. ISP showed me that tackling an issue from several angles could help in developing new and innovative ideas.

It is also important to note that ISP was about so much more than academics. Through ISP, I met people from all over the world (there were 16 countries represented on my hall!) and I made some of my best friends. I explored Philadelphia, made connections with my peers and some of the most renowned professors at Penn, and I found a strong community. I really cannot imagine what my life at Penn would have been like had I not been a part of ISP!

Rachel is a sophomore in the College majoring in Cognitive Science with an individualized concentration in Neuroeconomics and minoring in Psychology and Statistics. In addition to being a Ben Franklin Scholar, she is currently serving as co-chair of the Penn Traditions committee. Rachel is also involved in College Cognoscenti, MUSE Consulting, Admissions Dean’s Advisory Board, Wharton Neuroscience Initiative, Greek life, and Peer advising.

Stay up to date with Penn Traditions by liking our page on Facebook and following us on Instagram!