Have You Met the Gibson Girl? 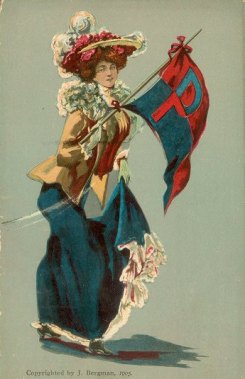 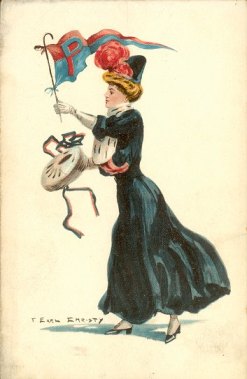 Who would have known that postcards on Penn’s campus in the late 19th century and early 20th century could bring light to a phenomenon happening across the United States? When one first takes a look at these postcards, as depicted above, it wouldn’t necessarily raise an eyebrow. The image is simply of a woman dressed in Penn garb or carrying a red and blue flag. At first glance, they simply look like a depiction of someone with exuberant school spirit, a billowing flag and extravagant outerwear. However, once we take a look past the initial image, the history of these postcards reveals a sociopolitical movement in the US and how it spread to Penn’s campus. These so-called “College Girls” or “Gibson Girls” took the nation by storm in the late 1800s and early 1900s, but besides being an artistic illustration, they also represent a complicated era in the history of the nation.

Who is the “Gibson Girl”? The Gibson Girl was the personification of feminine beauty and attractiveness in the United States largely during the Gilded Age. This ideal representation of women was usually portrayed through pen-and-ink illustrations that depicted an upper-middle-class woman with a small waist, upswept hair, a perfect outfit and a detached nature. This form of illustration was initially started by Charles Dana Gibson who was an American graphic artist from New York City. The Gibson Girl, at first, was a creation of Gibson to satirize the upper class while also being a representation of the beauty standards of that time that he says he saw on the streets of New York. With regards to Penn, the Gibson Girl had an alternative name, simply the College Girl, which various elite colleges used to portray their own university and were placed on postcards. The Gibson Girl soon became a trend that other artists adopted. This trend seems simple at first but can be interpreted in various ways.

However, before we explore some of these interpretations, let’s go back 100+ years in time to the late 19th century and early 20th century. Where was the nation, and particularly Penn, at that time in relation to women? For one, the Women’s Suffrage Movement was in full force in the country. While we all know women’s suffrage wasn’t nationally established until 1920 when the 19th Amendment was accepted, the idea of women’s suffrage had been introduced as early as the 1840s. The famous Seneca Falls Convention was held in 1848. The first national suffrage organizations were established in 1869 by pioneers like Susan B. Anthony, Elizabeth Cady Stanton, and Lucy Stone. Susan B. Anthony was arrested and taken to the Supreme Court in United States v. Susan B. Anthony for voting in the 1872 presidential election. Senator Aaron A. Sargent introduced a women’s suffrage amendment to Congress in 1878. The leading National American Woman Suffrage Association was created in 1890. There is no doubt that the role and rights of women in American society were being challenged during this era and that suffrage advocacy was on the rise. 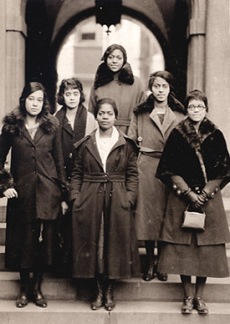 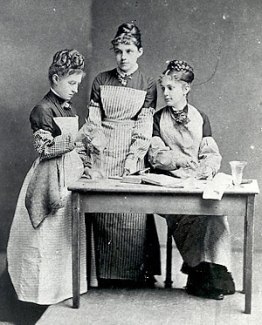 Now, while this was a nationwide view, there was simultaneously a Penn movement during this era. The late 19th century saw a variety of achievements and changes in the way Penn was run in relation to women. This era was the time in which various women were officially accepted into the schools of Penn and granted diplomas. In 1878, Anna Lockhart Flanigen and Gertrude Klein Peirce were the first women to complete a collegiate course of study at Penn. In 1879, the Trustees announced that “persons of both sexes are now admitted,” to various departments in the College, the School of Engineering and to the Department of Music. In 1880, the School of Auxiliary Medicine admitted its first women students. In 1881, the Law School admitted its first woman student. In 1882, the Graduate School of Arts and Sciences was the first to admit women to courses leading to a degree. And the list goes on. For Penn in particular, this was a clear shift in the access to education that women were getting after years of self-advocacy. There are various records of women attending open lectures at Penn or being enrolled as “special students” for years beforehand without ever gaining full access. After years of pushing, the tide began to shift.

Now, with all of this in mind, we can much more clearly begin to evaluate what role the Gibson Girl played in society. Particularly, some argue that the Gibson Girl became a depiction of the social anxieties that came with the changing role of women in American society. The various achievements of women in society and college brought about a fear that women would not be satisfied with traditionally domestic life and would alter their role as an educated woman. It became a much more conservative depiction that seemed to focus on the frivolous, playful pursuits of women as a means to reassure people who were afraid of the changing roles. The Gibson Girl was contrasted with the New Woman because of the belief that she wouldn’t involve herself in politics and would thus not join the suffrage movement unlike the latter. While many saw the Gibson Girl as a new interpretation of the American woman who was independent and active, others saw her as conservatively trying to address the changing role of women.

At first glance, these beautiful sketch images seemed to be simple and representative of Penn’s school spirit. However, once we take a deeper look, we begin to see a much more complicated history in a time where society was changing. While the depictions are now an interesting thing to take in as art, it is equally as important to understand the backstory and the resilience of women of this era who fought for their right to education and right to vote such to create a better world for women in the US now.