The Revolutionary Quaker: The Unheard History of Penn’s Mascot 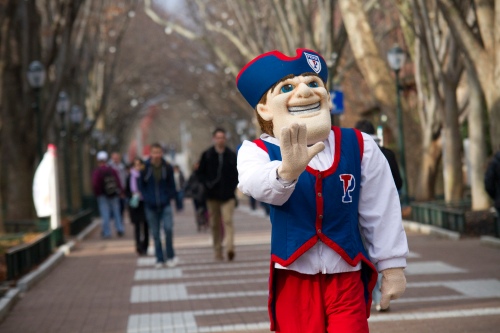 The Fighting Quaker? A term most people at Penn have become so accustomed to identifying with our mascot that we rarely question it or its history. However, anyone who is even slightly aware of the Pennsylvania-centered Quaker religious movement may wonder how a phrase so paradoxical in nature could end up becoming the well-known mascot of our own Penn. Even further, most people could also mistakenly associate Quakerism with the most famous figure in Penn’s history, Benjamin Franklin. Nonetheless, people will soon realize that Franklin was not a Quaker, himself, and that the university has never had any direct connection to Quakerism. But, even the paradoxical phrase, Fighting Quaker, does have some ground in history and became realized in the university’s athletics due to coincidental nature and geographic location.

In colonial America, the Quaker religion originally grew in prominence in New England. In the mid-17th century, Quaker missionaries traveled to North America in order to preach their religious movement that originated in England. However, they would soon enough face discrimination in New England as people considered them heretics and began to banish them from the Massachusetts Bay Colony. This persecution would lead Quakers in North America to migrate southwards where they would establish thriving communities in the Delaware Valley, particularly Philadelphia. William Penn, the namesake, and founder of the state would find Pennsylvania in 1682 and would run the commonwealth under Quaker principles. Quakers would maintain their beliefs of pacifism and pursuit of the “Inner Light,” which would be internally challenged during the American Revolution. As Philadelphia had become one of the largest cities and busiest trading ports in British America, there was a significant movement in the city that supported the revolution, even amongst the generally peaceful Quakers. In 1781, the Religious Society of Free Quakers, or more simply known as Free Quakers, would be established by expelled members of the Quaker community who failed to obey their pacifist nature n order to support the American Revolution. Hence, the term, Fighting Quaker, may not be such a historical anomaly as there actually did exist a Quaker sub-community that supported fighting for American Independence.

However, this still doesn’t answer the question of how Quakerism and Penn became associated, and the association wouldn’t directly emerge for another hundred years. As one of the oldest institutions in America, Penn has a lengthy history, and one of the many eras in its history would have to be its prominence in athletics in the late 19th century. In the early 19th century, student athletics had taken universities by storm as various organizations and teams were established. Penn’s first sports organization consisting of Penn students, the Junior Club, was founded in 1842. It wouldn’t be long before intercollegiate athletics would become a staple of college life.

Penn didn’t actually substantially enter intercollegiate sports until the 1880s and 1890s after Harvard, Yale and Princeton had begun to organize early intercollegiate athletics. Penn would set their foot with the establishment of Franklin Field in 1894. Once intercollegiate athletics picked it, it was sports writing that would serve as the definitive influencer on Penn’s mascot. Since Philadelphia was known as the “Quaker City,” it became easy for sportswriters to associate the university with the city and thus, the predominant Quaker religion and then call Penn’s athletic teams Quakers. This emerged much like the term “Ivy League” which began in New York sports writing to identify the colleges along the northeastern coast and as a reference to the custom of planting ivy on these college campuses. At the end of the day, the Penn Quaker was referenced enough that it eventually stuck and would soon enough be used in the 20th century and depicted on various pennants. 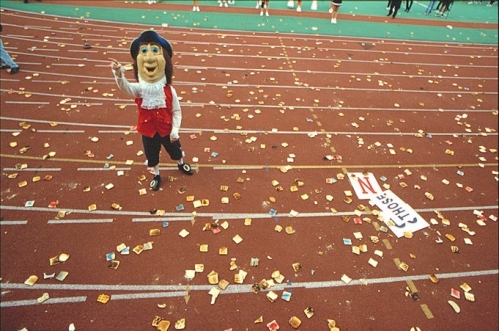 Once the Quaker was accepted, it would undergo various changes and enhancements. Quite recently in 2004 and 2006, the mascot would be refurbished and reintroduced after a previous version was criticized by many. Interestingly enough, on February 28, 2006, the Daily Pennsylvanian would run a story about the negative reaction to the new-look Quaker as people at a men’s basketball game reacted with “curious murmurs” about the new mascot that was believed to appear too menacing. Luckily, the new Quaker mascot has been accepted by the Penn community as he makes regular appearances at sporting events throughout the year. While the university is not a Quaker institution and has minimal interaction with the Quaker community, its location in the city of brotherly love would soon enough informally secure its mascot as the one and only, the Fighting Quaker.