During our time at Penn, Penn vs. Princeton basketball games were not to be missed. No matter how good (or not) the Penn and Princeton teams were, the games we played against each other were always nail-biters, exciting and exhilarating. We were blessed to see the start of a fabulous Penn run of Ivy titles when the team clinched the Ivy League title our senior year (our Ivy Stone is on the outside of the Palestra for a reason).

The Class of 1993’s Ivy Stone on the front wall of the Palestra.

When Penn played Princeton at the Palestra on January 6th this year (winning  76 – 70 – click for story here), we asked classmates to share their memories of Penn vs. Princeton basketball back in the day. Here is what they shared.

NOTE: Penn plays Princeton at 6pm tonight at Jadwin Gym. If you’re not at the game you can watch on ESPNU! Go Quakers! Beat Princeton!

Eli shared a Penn basketball stub and program from our win over Princeton 64 – 46 at the Palestra on January 30, 1993. 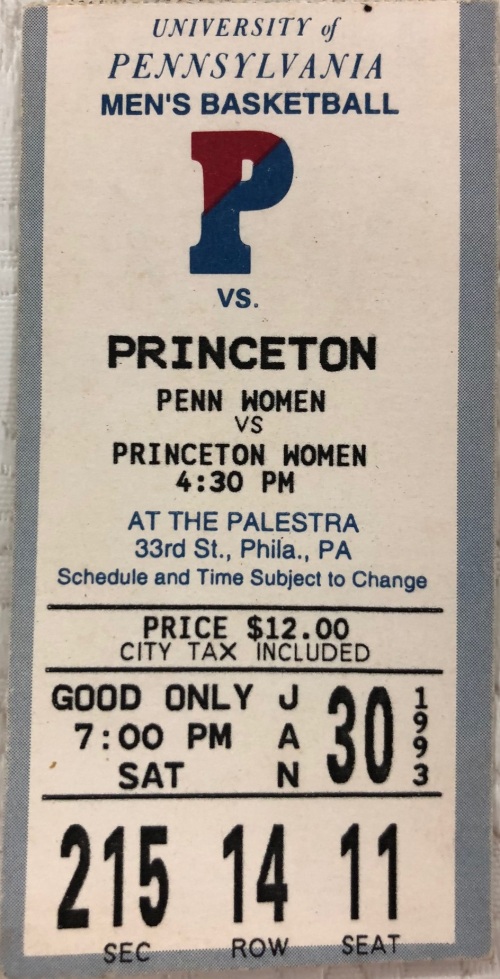 Program from Penn vs. Princeton men’s and women’s basketball games at the Palestra on January 30, 1993, courtesy of Eli Faskha, Eng’93, W’93

There was always a fun energy at the Palestra. Since it wasn’t a shallow bowl, even the upper level felt close to the action. One of my best memories was the Penn-Princeton game our freshmen year. Penn’s down 49-50 with 2 seconds on the clock. Paul Chambers is on the line for a one-and-one (I though it was Vince Curran until I saw video online). Chambers misses the free throw, but Hassan Duncombe swoops in for the offensive rebound and put-back. Penn 51-Princeton 50. The place went nuts. I remember throwing streamers from the stands after the first Penn basket of the game. Then there was Ivy Day, when we planted ours in the courtyard. I worked at a Med School lab for 2 years after graduation, so I caught some games then. I even saw a Penn-Princeton game at Jadwin. It wasn’t the Palestra.

Read the post from last year Happy 90th Birthday to the Palestra which includes photos of basketball programs that Stephen shared. 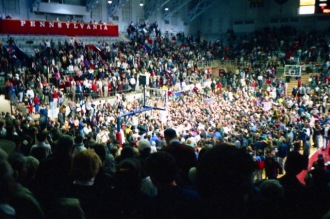 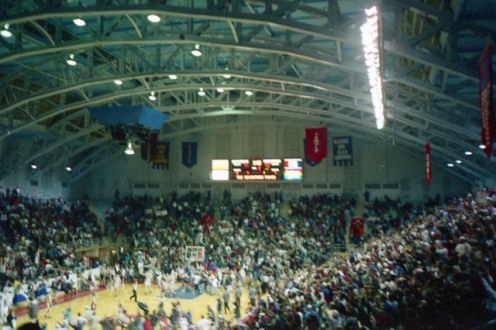 Unfortunately for me, I didn’t go to basketball games my freshman year, so I missed the Chambers, Curran, Duncombe era. But our junior and senior years were pretty special. I think it was our junior year that we went to the Penn-Princeton game after a club board meeting – all of us didn’t have tickets and somehow we snuck in and were up in the corner. And it was craziness and so much fun.

What a lousy place to see a game Jadwin Gym was…

The Good, the Bad and the Ugly: Penn, Princeton and Pete (Carrill).

I can’t remember what year it was but I remember Penn students unrolling those two long banners right behind the bench during that game.

Great memories, one of which was standing in front of a much older alumnus. I’m thinking he was probably at least 60. He kept bugging me to sit down, I was blocking his view. He was the ONLY ONE SITTING DOWN. Finally he started yelling at me. So I sat down. After a few seconds when nobody else in front of him sat down, I turned to him and said, “Well that worked didn’t it?” And stood back up. He left. Maybe he was a Princeton alumnus. Who knows.

Second best: late 1991-1992 season just before the Quakers busted out, Barry Pierce missed a three pointer at the buzzer that would have beat Princeton, from the right corner. It just felt good to put a scare into the Princeton fans in the Palestra. It also felt hopeful for the future.

Tim Krug’s dunk down the lane against Princeton in the ’92-’93 undefeated season putting an exclamation point on the 64-46 win at the Palestra.

There is no beating this moment: Maloney 3 to put us up by 10, and immediate Princeton time out. This is the moment we knew this season was going to be something special:

That block by Krug was epic, and Maloney was a stone cold assassin. What a fun team that was. And that video really shows how great the crowds were back then. We need to see those kinds of crowds again at the Palestra. I think Donahue is slowly getting us back there. Go Quakers!

The Marriott Downtown (where we had a Penn 1993 and a Penn Alumni room block) is sold out for Alumni Weekend. There are alternative hotels. We recommend booking ASAP! Please see our class website for additional details.