Virginia Webster Hilligoss Patton, CW’67, recently returned to campus for a very special Alumni Weekend. Virginia celebrated her 50th Reunion and spent the weekend reminiscing and catching up with fellow classmates, alumni, and her three siblings. She spoke with Penn Alumni Relations about her college experience, fondest memories, and family connections to Penn.

Virginia is the youngest of four siblings. Her two older brothers, Spencer Webster, W’57, and Richard Webster, W’58, and older sister, Linda Webster Huggler, CW’62, all attended Penn in the late 1950’s and early 1960’s. From an early age, Virginia felt a strong impetus to not only attend college but specifically the University of Pennsylvania. With such strong family ties to the University, Penn was really the only choice in her mind. While at Penn, Virginia and her sister were student-athletes, playing on the Women’s Field Hockey team. They were also members of the Tri Delta Sorority. They still value the strong friendships and bonds they made there.

Although Virginia grew up in Suburban Philadelphia with her family, she later moved to California and does not have an opportunity to return to campus often. This made Virginia’s homecoming to Penn even more meaningful. She remarked on how much the campus has changed, with so many new buildings and spaces. However, some buildings remained seemingly untouched, like the iconic architecture of Houston Hall, with its comfortable interior spaces and fireplaces. Virginia commented that Houston Hall had always been a common meeting place for her and her classmates. In that regard, not much has changed.

Virginia went on to share one of her most memorable moments from her time at Penn. In her Senior year, Virginia became the first woman to sit on an athletic board when she took on the role of President of Women’s Athletics. Virginia remembers advocating to an all-male board about the need for better facilities and equipment for Women’s Athletics. However, it’s safe to assume that after Alumni Weekend, one of Virginia’s fondest memories of Penn is probably this photo of her and her three siblings enjoying the Alumni Picnic. What a special moment it must have been to come back and share in this Penn Tradition together. 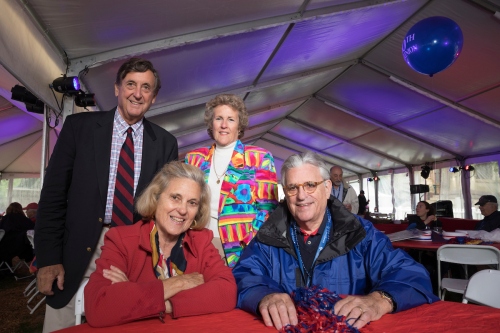