The Penn Club of Chicago brought the holiday cheer early this year with a fantastic event – the Penn Holiday Party! Attracting around 100 alumni to the Wicker Park- Bucktown area, the event reunited fellow Quakers from all different classes. Thanks to the generosity of Liane Jackson (C’93), who opened up her space, the Free Range Office for the night of festivities, the venue transformed into a Red and Blue/ Holiday/Winter Wonderland extravaganza. I was happy to be a part of the event planning committee, led by Alexandra Leska (C’13) and felt so proud of the immense school spirit and the “go-getter” Penn attitude everyone brought to make the event a total success.

Here are my 5 favorite highlights from the event (with collage style pics!):

No matter where they have been and how long ago they have graduated (from since last may to the 60s), Penn alums bonded over the commonalities they shared from attending our beloved alma mater. The Penn culture was evident throughout the crowd – as the social, easy-going personalities intermingled and filled the room with laughter and lively conversation. It was heartwarming to see everyone come together like one big family. 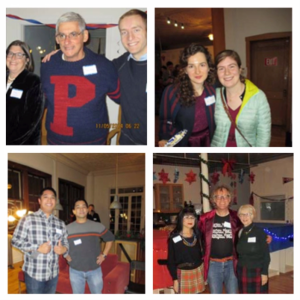 While cheerful jingles played in the background, alums gathered at the various stations of the room. Underneath the Penn flag was the wine/chocolate pairing table. A Penn-themed photobooth entertained various groups of alumni, who donned the Hey Day hat (probably first time since junior year) for a picture. Alums bought raffle tickets at the entrance for a chance to win Penn memorabilia and other prizes. A piñata hung in the center of the room, because why not? At the back of room was the beer tasting station, with a dozen various types of beer thanks to Eric Wu (W’04) and MillerCoors. It quickly became a popular hangout spot, which Quakers dearly nicknamed “The Beer Garden” at some point during the night. Hey, Penn is the social Ivy after all. Some things never change.

The main course at the party was a healthy combination of Philly cheesesteaks (provided by Mojo’s East Coast Eats) , hoagies, and pretzels. Nothing better to bring us back to our campus days than a large bite of chopped beef with Cheez Whiz on bread!

Thanks to Laura Foltman (MS ’14) and the Penn alumni office, many people were able to win Penn memorabilia, including an antique Pennpoly 1st Edition game from 1991. There were also some one-of-a-kind prizes donated by alums, including a special architectural drawing by Peter Exley (MArch ’90), a Jazz trio with Eric Williams (C’89), and party space for 50 people at the Free Range Office from Liane Jackson (C’93). 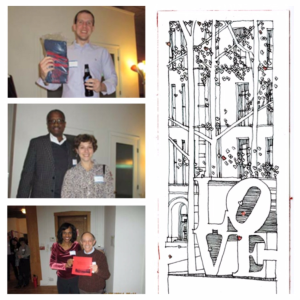 One of the most exciting parts of the party was the piñata. Several Penn alums were called from the guest list to take a shot on breaking the piñata. The first swing was an honorable effort. We quickly realized that the piñata must have been made from really tough material, since the stick snapped in half while leaving the piñata unscathed. After several tries but to no avail, the final candidate finally ripped it apart, as sweets fell out onto the floor among a lot of laughter from the spectator crowd.

Overall, it was truly a memorable evening, thanks to the alums bringing the great energy to the party. One thing is for sure: once a Penn student, always a Penn student at heart!