Spring has finally sprung on campus, dear Quakers, and just in time for Penn’s greatest weekend ever: it’s time for FLIIIIING! 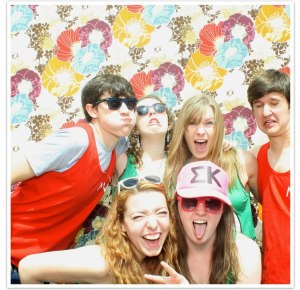 Fling 2013: goofing around in the photo booth 🙂

In case you’ve been living under a rock, or you just happen to be reading this blog post and you don’t go to Penn, Spring Fling is the biggest (and best!) college festival on the East Cost, in existence for now over 40 years.   The festival actually has a pretty rich history and is certainly one of Penn’s biggest traditions.  Without a doubt, it’s the favorite tradition among students!

The theme for this year’s Fling is the oh-so groovy  ❀☮ PEACE LOVE AND FLING ❀☮  I’d be lying if I said I wasn’t super excited.  SPEC has a great line-up for the big concert on Friday: Magic Man, Ra Ra Riot, and headliner David Guetta!  I wasn’t familiar with the first two artists when SPEC first announced them, but after to listening to them on Spotify I am so stoked to see them perform live.  Here are a couple favorites of mine from Magic Man and Ra Ra Riot, both of which I hope are played at the concert! 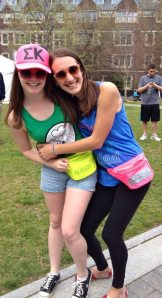 Lilly and I before CP takes the stage!

As great as the big concert is going to be, I have to admit that I’m looking forward to the Quad concerts the most!  It’s the chance to see my friends in other performing arts groups rock the stage in front of the entire student body.  I’m especially excited to watch Bloomers Band, Penn Glee Club Band, and Penny Loafers a cappella (good luck guys!).  Counterparts will also be singing in prep for our Spring show…but that’s for another blog post 😉

The final performance, however, is going to bring the walls of the Quad down.  Some lovely ladies of Counterparts (Sam, Swaroop, Lilly) and I will each be singing with the Mask and Wig band!  Their performance is the final one of the entire Fling weekend, and it always draws a huge crowd.  I can’t wait to be up on stage with them, mostly because my performance is going to be something I’ve never done before.  I’ll be singing the song Timber by Ke$ha and Pitbull.  Well, actually, I’ll be rapping it.  Yes, you read that correctly.  I’m going to be rapping Pitbull’s part of Timber.  And I literally cannot wait. 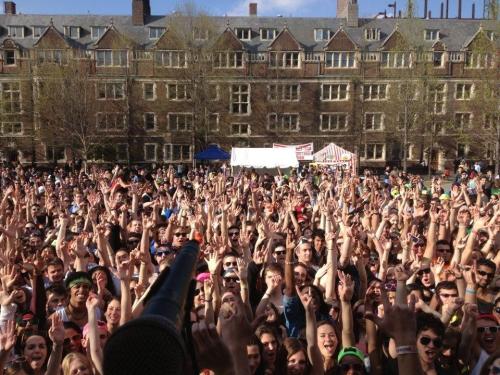 A crowd shot from the Mask and Wig stage. I’ll be up there in almost a week!

So grab your fanny packs, don your neon tanks, and make room for the fried oreoes, dear Quakers.  The countdown to Spring Fling begins NOW!