We have all called the number. Knowing what we’ll hear. That guy. That voice. You remember, even now, years later, as alumni: “The University is open and operating on a normal schedule.” I hated that guy.

Back in my day, we had phone receivers to slam down in disgust. Now, all students can do is think mean thoughts as they gently press “End Call” on their mobile phones. They may never know the evil glee of slamming down a phone. At least not until it’s time for an upgrade.

Penn never closes. It’s a thing. So much of a thing that, when it actually does close, part of us is incapable of believing that it is true. Yet, on Friday, January 3 I received a text message early in the morning to notify me that only “essential personnel” were required to go in that day. I have never been so pleased to be non-essential. I read it again. SNOW DAY!

The only time Penn closed during my entire time here as a student was during what I call “The Ice Storm of ’93.” I had never seen anything like it. Some strange mix of precipitation and temperature fluctuations left the entire city covered in about an inch of solid ice. The trees were beautiful, but things like, oh, walking or even standing still on an incline became both treacherous and highly entertaining. Want to learn patience? Walk a city block on an impenetrable sheet of ice. I guarantee that you will be in no rush to arrive anywhere, and you will develop near-meditative focus on each step. We would all laugh at how ridiculous we looked, how we flailed, how we slid. But arriving at any destination more than two steps away became cause for celebration.

On the downside, I found out that one friend of mine slipped, fell, and got a concussion. But he wasn’t walking to class at the time, because of the upside: classes had been canceled. Our buddy at 898-MELT had actually recorded a new message for us! I don’t remember what he said, but I do know I listened to it more than once, possibly gathering around the phone with my roommates to listen to it again and again. And despite having already received a text message on Friday, I still called the number. I was not the only one, because it is such a rare treat to hear anything – ANYTHING – other than the message playing once again today: “The university is open and operating on a normal schedule.” Sigh. I still hate that guy. 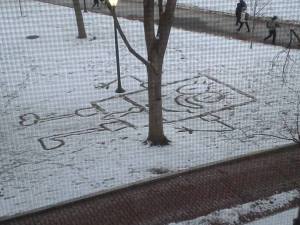 Seen on College Green in December. This is not from our recent “snow day,” but I think it captures the appropriate spirit.