On Monday night, I attended the yPenn Speaker Series at the Penn Club of New York with Jay Fishman, CEO and Chairman of The Travelers Companies.   I was pleasantly surprised by the turnout and appreciative of the value of the event and Mr. Fishman’s insights.

The event began with a cocktail reception on the 10th floor where we spent time catching up with fellow young alumni. Despite there being more than 40 people, the space felt intimate and there was ample opportunity to chat with Mr. Fishman. As expected, many of the alumni attending the event were financial professionals, but there was a surprising amount of diversity. I, for example, a young alumna who works at a brand consultancy was happy to connect with an ’06 alumna who started her own gorilla marketing company.

When Mr. Fishman spoke to the group he provided great advice for us young alumni. He briefly discussed the economic state, but really focused on the essentials of professional development. He told us to keep our options open rather than narrowing them and specializing. He emphasized the importance of learning both how to receive and deliver feedback. He said the people you work with are even more important than where you work and you should always feel like you are learning. He recommended treating every project given to you, whether perceived as important or not, as an opportunity to demonstrate your ability and skills.  In addition he fielded questions from the group about Sheryl Sandberg’s most recent career advice, his daily responsibilities at Travelers and his involvement on many prestigious Boards.

Mr. Fishman was a strong start to this yPenn Speaker Series. He is truly an admirable leader.  He takes a long-term point of view calling financial performance a marathon, not a sprint. He takes few, but calculated risks and he hasn’t strayed from his strategy.  Forbes had an article about him called “Wall Street’s Honest Man” and said “he has nothing to hide.” In fact, he is a remarkable tale of straight-talking his way to success.”  He was truly inspiring, motivational and engaging. 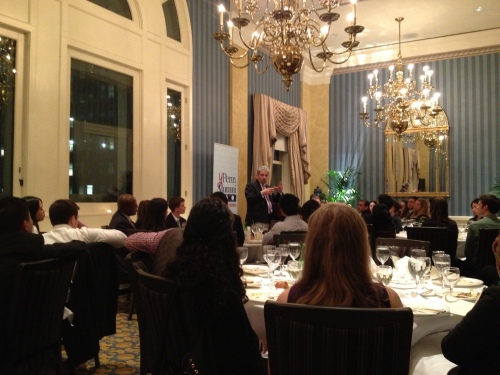