This Time of Year

This time of year in 1984, I was accepted via early decision into the University of Pennsylvania. My acceptance was binding, and I would be leaving for a campus I had never seen. My father and I had visited quite a few universities on the East Coast on a Spring break trip from Los Angeles, and I disliked most of the places we saw. None of them seemed to be the right fit.

As a Penn alumnus from the 1960’s, my dad remembered the Penn campus as a city school. When I started looking at colleges, he did not think it would be the right place for me and so we didn’t schedule it on our campus tour.  But then, my parents were on the East Coast visiting friends and they suggested that Penn had changed significantly over the years. After that, my dad said, “For all the reasons you did not like those other schools, you will like Penn.” I trusted his opinion and took the leap to apply early. Just a few short months later, I got my acceptance letter. I remember feeling so amazed and excited.

I had nearly the same feeling after graduation when I opened the big envelope from Penn inviting me to join the University community, and then again, when I learned I would have an article published in National Geographic magazine.  As a reader and a traveler, I have always loved the magazine with the golden yellow square and now in a small way, I am a part of it. I believe that my experience at Penn helped to shape my adventurous side. From coming to campus sight unseen as a freshman and then having such a great four year experience both in and outside of the classroom, Penn taught me that taking risks could lead to unbelievable, life-changing discoveries, such as those I made in writing the article.   I hope you enjoy reading  about the Royal Cremation in Ubud, Bali, Indonesia as much as I enjoyed writing it. 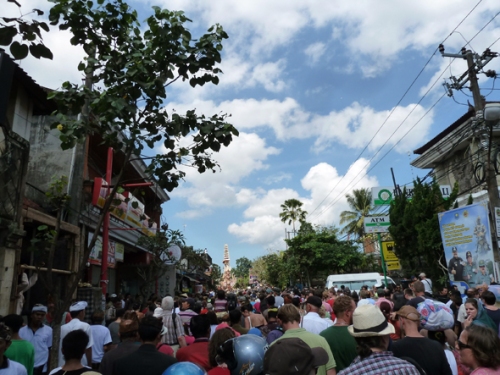 The crowd at the cremation ceremony.

Travel writer Lisa Ellen Niver (Penn 1989) is spending the year in Southeast Asia with her husband (both of whom are members of the Traveler’s Century Club). Follow her adventures on their blog, wesaidgotravel.com, and on Twitter @wesaidgotravel.