This week, Penn’s Class of 2016 is arriving on campus and moving into their dorms, meeting their roommates and hall mates, and exploring all that Penn has to offer. Before they made their way to Philadelphia though, many Penn Alumni Clubs around the world welcomed them to the Penn family and celebrated them at summer student send-offs. Here is a sampling of some of the west coast celebrations.

Penn Club of San Diego president Robby Koeppel Foss, C’92, GED’92, writes, “It was exciting to meet so many talented new students! The families and students enjoyed hearing more about Philadelphia and our helpful hints for moving to the East Coast and Penn favorites. The San Diego Alumni that spoke: Gina Tapper, Troy Morrison and Jaleisha Jacobs gave great perspective on their different experiences. I just loved giving out, Philly style cheese steaks, Tastykakes and Soft Philly style pretzels to local San Diego natives who never had tried them!! I was grateful to the Philadelphia Tourism Board and Campus Philly for sending me helpful guides to hand out to the families!” 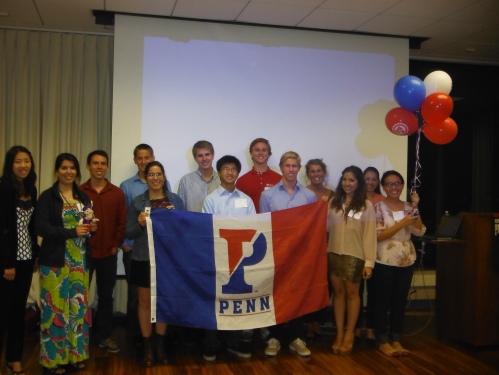 In Orange County, CA, local alumnus Alfio Rossetti W’01, hosted students and their families at his family’s restaurant Roma d’Italia in Tustin in a now annual gathering organized by the Penn Club of Orange County.

Delicious Italian fare at the OC gathering at Roma d’Italia.

Students mingling and meeting each other at the Orange County send-off event.

In Washington, the Pugent Sound Penn Alumni Interview Program hosted a dinner for students and parents at the home of Janie and Raymond Lee, PAR’14, in July.

Co-chair of the Puget Sound Penn Alumni Interview Program David Blum, W’74, writes, “These freshmen were excited to meet each other, along with several Washington upperclassmen, and to learn more about undergraduate life at Penn. Students from Washington are excited to leave soon for Philadelphia. The weather was beautiful and everyone enjoyed themselves!” 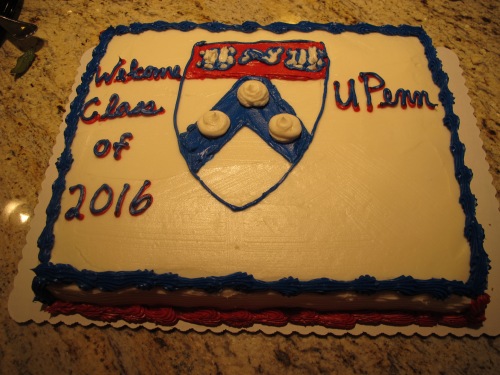 In Washington, there was a red and blue cake.

Penn Class of 2016 from Washington State!

And in Portland, John Vosmek, C’61, president of the Penn Club of Portland shared these photos from the Penn Club of Portland 2012 Summer Lawn Party (and New-Student Send-off) at the home of Taizoon, EE’83, and Munira Doctor. Four of the area’s eight members of the Class of 2016 and three members of the Class of 2015 joined alumni, parents and friends on a typically beautiful Oregon summer evening.

This is just a sampling of the many freshman welcome events that took place all over the world this summer. While their students are at Penn, Penn Parents are welcome to join our regional Penn Clubs – and we hope in four years the Class of 2016 will join their local Penn Club and continue this tradition.

For our most recent alumni, join your local Penn Club and attend a First September event welcoming the Class of 2012 in your town: http://www.alumni.upenn.edu/club/firstseptember/index2012.html