When I started my freshman year at Penn, the only thing I used the internet for was AOL, and all that was good for was e-mail, instant messenger and (nerd alert) checking out The X Files fan page. Before school started, I got a Penn email address and I thought it was really cool to have e-mail that wasn’t an AOL account. Penn even gave me six choices for my email address. Unfortunately, both my first and last name were too long for their eight-character limit, so I went with “ehk2” because I thought it sounded nice and was easy to remember. Turns out, you can never get rid of your Penn email account. Not even if you come back to Penn five and a half years after graduation and join the administration. Thanks, 18-year-old self, for my less than professional work email address. Anyway, when I got this sparkly new ehk2 email, I had no idea how you would check email that wasn’t on an AOL account, or how the internet existed without AOL and a telephone line. To me, AOL was the internet.

While I was setting up my dorm room, an IT guy came by and explained our cable internet access. I didn’t understand and asked him how I would get online. He patiently explained that I was always online. I still didn’t get it and even my technologically-clueless Mom had to chime in and help him. The poor IT guy needed to see so many students that day, and here I was, needing my Mom to explain to me how the internet worked. I asked him how I could access my AOL X Files fan site, at which point he just gave me the phone number for the help desk. Sooner or later (probably later) it clicked, and I felt like I had won the lottery! No more weird staticky dial up noises while waiting to hear “Welcome! You’ve Got Mail!” Email arriving on my computer screen whenever it wanted to! And, best of all AOL INSTANT MESSENGER. 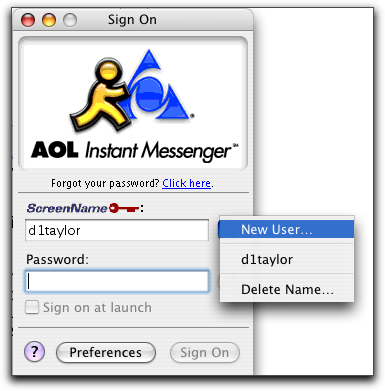 AOL Instant messenger, or AIM, was the chat part of AOL, except you could access it without signing onto AOL and be on it all of the time, except when you turned your computer off. You could also leave status messages. So, when you went idle your name would appear in italics and your status would say, “In class” or “Dinner with Terri.” A lot of people (not me) would leave AIM up all night long, with the status, “Sleeping.” It seemed absolutely necessary that your AIM friends should know where you were at all times. Another great thing about AIM was building your chat list as you met more and more people. A key part of a new friendship with someone was exchanging AIM names.

AIM was great, but it also meant that you had to use your email name from your AOL email. I got my AOL account in 8th grade, and my name was “PBGiggle.” At fourteen, I thought this was brilliant, and I don’t have nearly enough space here to explain why. Suffice it to say that by 20, I felt like an idiot. So, I made a bold move junior year and changed my AIM name to “EdashLiz” (E-Liz, get it?). Because AIM was so omnipresent during college, our AIM names became part of our identities, and changing from PBGiggle to EdashLiz was like growing up. A lot of my college friends still call me “Edash.” AIM names also taught you things about people. For instance, my friend JUDE831 loved the Beatles and to this day I still remember that her birthday is August 31st. Another friend’s AIM name was fish3333, because she loved to swim (a habit she didn’t keep up in college). I probably never would have known of her swimming past without her AIM name. So much information in just seven to ten characters!

Eventually, when jobs and “real life” hit, AIM fell to the wayside, but I still miss it. I miss the excitement of seeing a boy I liked or a friend I hadn’t talked to in awhile sign on. I miss everyone’s colorful, fun status message for Spring Fling (“Flinging!” “Spring Fling!” “Fling, baby!”) It seems like students today use facebook chat, which I understand – it’s probably easier and you don’t need to remember some weird iteration of someone’s name in order to talk online. Plus, I’m part of the Facebook revolution (more on that in the next blog post) so I think it’s hypocritical to complain about it. But, part of me is sad that today’s students won’t experience the magic of AIM. After all, what would I call my best friend from Penn if she wasn’t “TBelle?” Not by her actual name – that’s just ridiculous.

6 responses to “I Remember…AOL Instant Messenger”