We arrived from different directions on May 28, but the Penn Alumni group all converged one chilly evening, in Greenock, Scotland, to embark on the SS. Le Boréal for our adventure in the Celtic Lands. Our ship at first looked tiny, docked next to the gigantic SS Queen Victoria, but it was to prove a comfortable and elegant home for the next nine days.

After the thrilling life boat drill in our stylish life jackets, a four-course dinner while we sailed down the River Clyde, and then a night of sound sleep (for those of us who had just arrived in Scotland that morning), we awoke the next day in what felt like another world, moored next to the tiny Isle of Iona, in the Scottish Hebrides.   Tenders took us to the ancient restored abbey of Iona, founded by St. Columba in 563 AD. 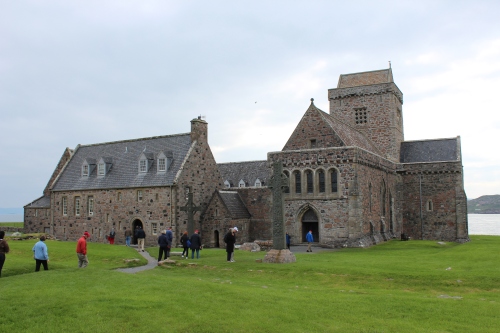 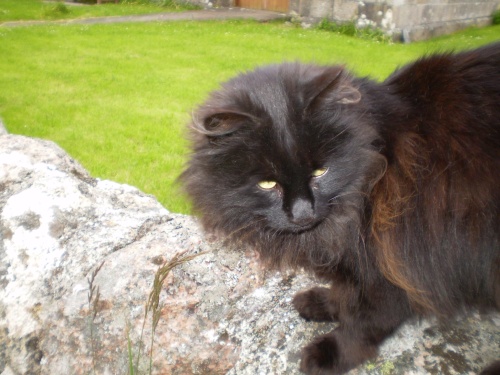 From there we took the ferry to the Isle of Mull, where we boarded buses for a journey on “one-track roads” in our rather large bus across the island  to Duart Castle, home of the  Clan Maclean,  a great stone keep perched on a bluff overlooking an inland loch. 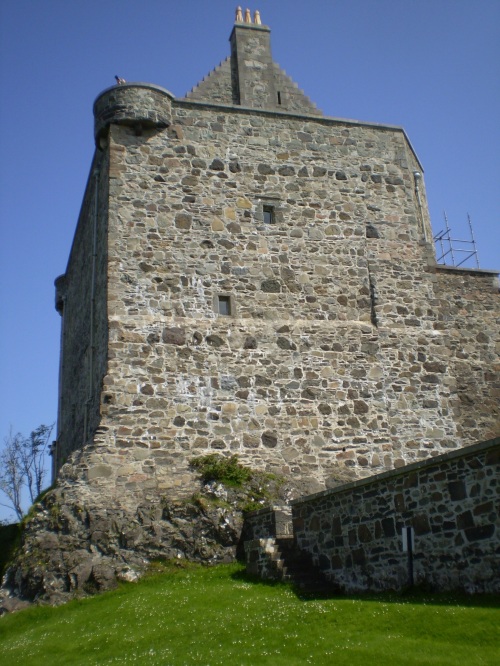 The weather was the first of an extraordinary stretch of brilliant blue skies with massive ever-changing clouds (many of us could not stop taking photos of the clouds). The bus then took us to our final destination of the pretty village of Tobermory, where I enjoyed shortbread and tea in the local bakery and bought the first of my little tiny bottles of samples of the local whiskey and brandies from our shore excursions (for my son-in-law, not for me). 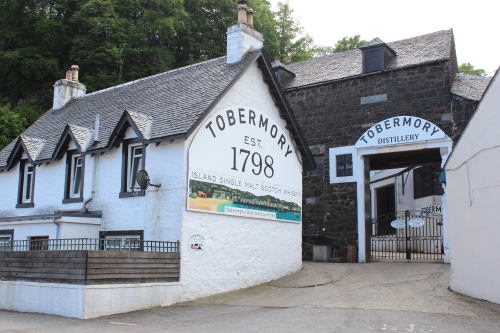 The next day, our ship took us to the Isle of Skye, the largest of the inner Hebrides, which looked almost metropolitan in comparison with tiny Iona and Mull (it had “two-track,” or two-way, roads).  We circled part of the island through magnificent scenery inhabited mostly by sheep (who were omnipresent throughout this trip—thousands of sheep!). 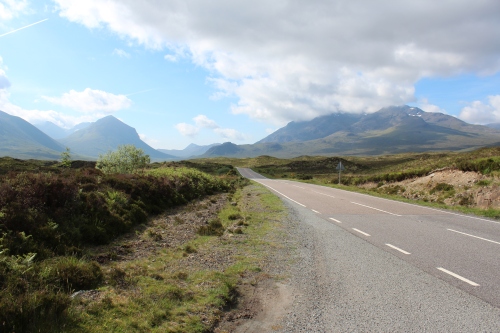 We stopped for a visit to Dunvegan Castle, home of the Clan MacLeod,  still very active today: the castle had some pretty gardens not yet in full bloom.

There we took the first of our group pictures of what I would now think of as the Clan Penn (I can reassure you that our relations with the Brown, Dartmouth, and Northwestern clans on the ship remained friendly throughout the journey). 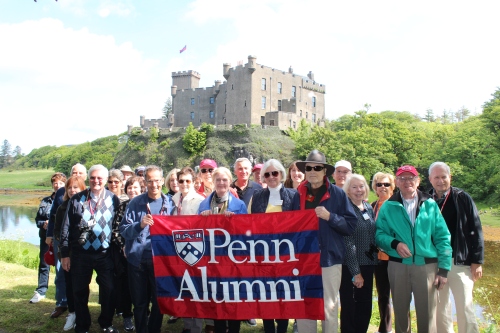 That afternoon, as we left the Isle of Skye, I gave the first of my lectures, on “Shakespeare and the Celtic Lands,” discussing how ideas of England in Shakespeare’s time were forged in both conflict with and assimilation of the countries and people of Scotland, Ireland and Wales.  The sense of national pride  and independence that Shakespeare saw in these often rebellious peoples was evident today  in every place we visited – and it is clearly growing daily.

The next morning we awoke in a very different sort of place, in Belfast, a city with a storied past of shipbuilding now most prominently memorialized in the fabulous RMS Titanic Museum (obviously very popular because it was very crowded on a Sunday afternoon). We took a city tour of Belfast, which included not only the city monuments, but also the working class Republican and Loyalist neighborhoods, where the sense of the past is still very present. Memories of the “Troubles “were vividly depicted in evocative and sometimes disturbing murals everywhere. 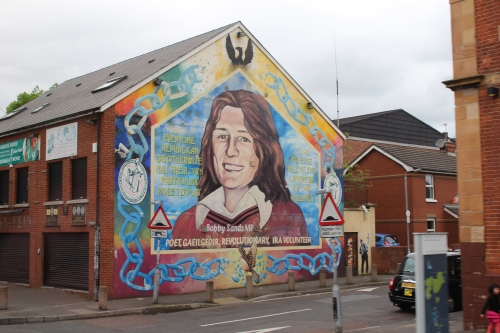 That afternoon, I gave my second lecture on “Shakespeare and World War II,” looking at Laurence Olivier’s film of Shakespeare’s Henry V  produced in 1943-44, on the brink of D-Day. For me, Olivier’s film provided an instructive way  to link multiple pasts to the present, and to look ahead to our destination in Normandy, on the eve of the 70th anniversary of D-Day.

That night all the Penn clan gathered together for a reception, and a more formal portrait: here you see us in one of the ship’s lounges, having put down our cocktail glasses for a moment. 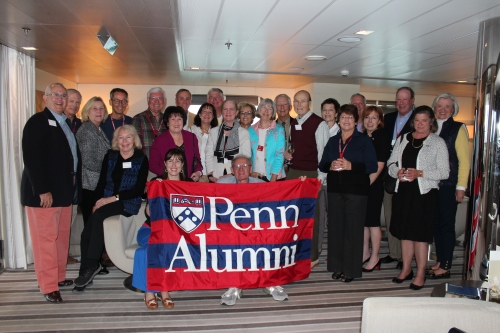 But our next stop was Holyhead, Wales, and a full day excursion, beginning with the extraordinary Bodnant Gardens, where many of us could have spent the whole day. It was raining lightly part of the time we were there, but it only made the gardens that more lush: water ran everywhere, in the dells and in ponds and streams. The roses were blooming, as only British roses can. Everyone was quite entranced 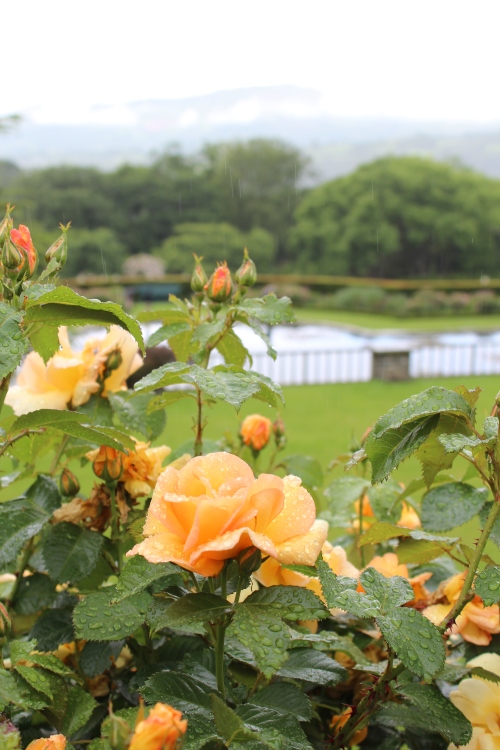 We had lunch in Betwys-e Coed, and listened to a charming all male choir, who sang mostly in Welsh, and then charted our course through the magnificent Snowdonia National Park, a land of  rugged and desolate mountains, with some slopes dramatically strewn with slate. 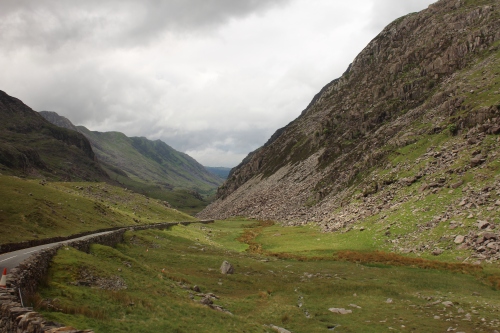 The day ended with a visit to Caernafron Castle, built by Edward I to contain the medieval Welsh rebels: it was an imposing structure, built to intimidate (and even confuse some of us, like myself, who got lost in its winding and slippery staircases and corridors that led nowhere). 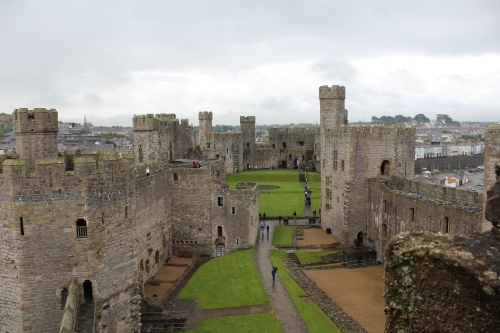 That night we headed west again, and docked in Dublin, and the Republic of Ireland. Some of us took a bus tour of the city, but since I had spent a long and lovely summer studying in Dublin and Ireland when I was in college, I took off on my own to revisit some old haunts of mine and just to enjoy the city, both what was old and familiar and what was new.

That night we set off on our full day at sea (at little rocky at first), when we were entertained and enlightened  by the various faculty hosts, and by  our special guests, Cecilia Sandys, Churchill’s granddaughter, and Penn’s own faculty member,  David Eisenhower, Dwight Eisenhower’s grandson. The two of them gave fascinating lectures offering personal anecdotes and insight into the historical events involving their grandfathers. Both were engaging speakers, and we felt very lucky to have them with us on the trip.

The next day, June 5, was certainly memorable, as we arrived in Normandy, France, on the eve of the 70th anniversary of the D-Day invasion.  We began the day on the striking bluffs of Pointe du Hoc, where the brave US Rangers scaled the cliff under heavy bombardment: the landscape is still scarred by deep craters left by the bombs, and blasted German fortification. 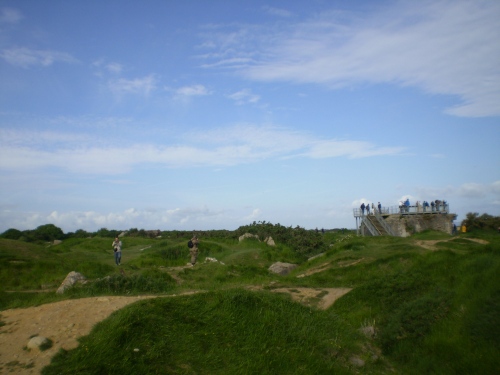 We then traveled first to Omaha Beach and then  to the famous American cemetery at Colleville-sur-mer. Preparations were being made for the ceremony attended by 25 heads of state the next day, but we had a moment for our Penn veterans  to lay a wreath at the memorial. 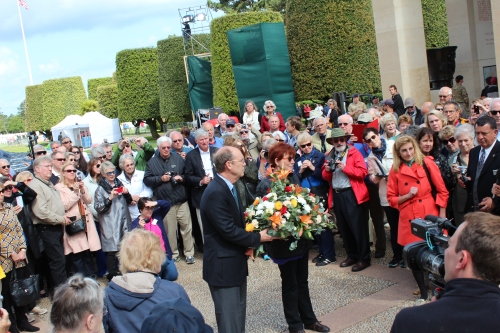 As we sang the National Anthem, a WWII vintage plane flew overhead. All of the sacrifices made that time 70 years ago seemed quite achingly present at that moment. 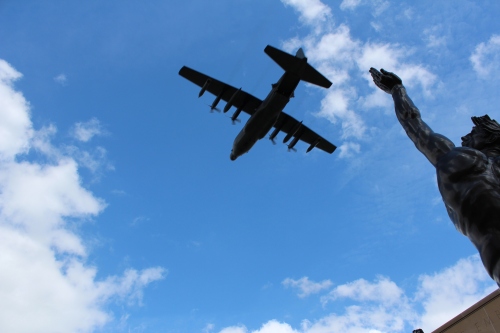 The day ended with some of us visiting the D-Day Museum in Arromanches, and others in Bayeux to view the medieval embroidery of the Battle of Hastings.  Then our ship left France with us sobered by those memories, and headed for England and for Portsmouth, where we disembarked for the final time, and  visited the D-Day Museum there and Southwick House, where the decision was made to launch the invasion. 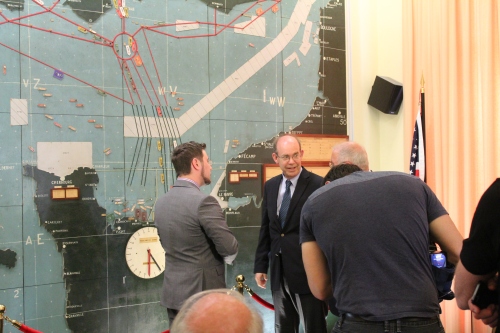 David Eisenhower talks to a local camera crew about the D-Day invasion map at Southwick House.

Then it was time for us to go our separate ways. But we all knew we had shared something special on this trip, not only through the experience of amazing natural beauty, but also through so many moments in which the present touched the past. As my remarks above suggest, wherever we traveled we learned that memories in this part of the world are long, and that history matters.

So indeed, it was a journey that I am sure we shall not soon forget ourselves.