As a new student at Penn, I found the enthusiasm of Penn alums and students during Homecoming Weekend  featuring arts & culture to be contagious.  And seeing the campus covered with red and blue—balloons, flags, and of course students, alums, faculty, and staff decked out in school colors—brought a truly festive air to campus despite the gray, pre-Sandy weather.

Homecoming Weekend this year had a lot of great events.  With academic, sporting, cultural, diversity alliance, and other events, there were plenty of opportunities for everyone to find something that spoke to them.  One new event this year was the Blutt Band Slam, made possible by the generosity of Mitchell Blutt, C’78, M’82, WG’87.  It featured six student groups/performers and two alumni groups, with a wide range of styles—rap, indie, rock, folk, classical, a cappella, and more.

The Band Slam was held on College Green, just in front of Van Pelt, and a lot of people passing through on their way back from the football game (which Penn won—go Quakers!) or heading to their next event stopped to listen.  All of the performers delivered outstanding performances—I was truly impressed by the breadth of talent and creativity of all the musicians.

I’m glad I wasn’t a judge—I can only imagine the difficulty they had in choosing just three winners! 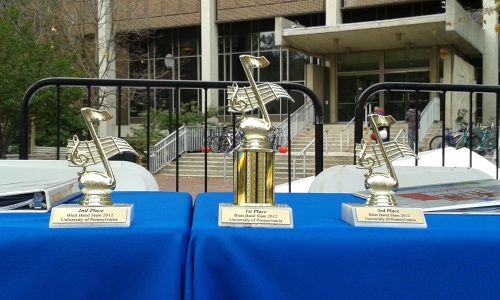 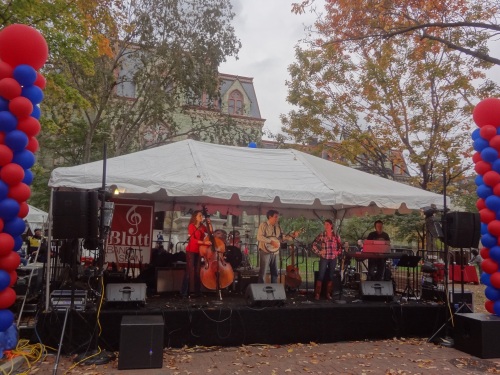 The Hippocrates Trio, comprised of Rena Zheng, C ’07, M’15, Alex Pantelyat, C’04, and James Choi, D’14, took the Student Prize of $500. They’re a classical piano trio who formed this past summer, and participate in the Penn Med Music on Call student organization.  They perform for University of Pennsylvania Health System patients and families.

Finally, the overall winner was sophomore Sarah Lindstedt, who took home the $1,000 Overall Grand Prize!  Sarah writes and plays her own music, in addition to cover songs.  After the awards, the audience was treated to an encore performance by Sarah.

I think all who attended would agree, the Blutt Band Slam showcased a lot of Penn talent and we hope to see it featured at many more Homecomings!

Filed under Homecoming Weekend featuring arts and culture, Student Perspective, The Arts, The Arts at Penn