As I left the Palestra on Friday night, I was upset.  Penn had played a terrible game and lost to Dartmouth.  I had seen games like this before: a rough road loss to Columbia, a road game against Harvard, and home losses against Cornell and Yale.  But it has been a season of Ivy splits for Penn, as paired with each bad Ivy loss this season there has been a win.  If there was going to be a split this weekend, the money would have been on a victory over Dartmouth and a loss to Harvard.  So, as I left the Cathedral of College Basketball Friday night, I was dejected.

I had put off going home for spring break in order to see two more basketball games, but of course, when I bought the plane tickets, I hoped we might be in Ivy contention. As of Friday night, we were mathematically eliminated from the Ivy race. Friday’s crowd had been lackluster at best, and I knew that fewer students would show for Saturday than for Frid

ay, due to travel during the break.

As Chair of the Red and Blue Crew,  I had met with Penn Traditions to discuss possible collaborations a few days before any of this happened, At that meeting, I learned about the Volunteer Thank You event happening right before the Saturday game.  I volunteered to help, and had a great time hanging out with alumni and their families.  With that event, each person received two tickets to the basketball game, and because of this, the Palestra was packed; as full of Penn fans as I have ever seen it. And, as Penn opened the game against Harvard with tough defense and effective offense, the crowd got into it!

Penn led by 12 entering the half, and held on down the stretch to win by 3, 75-72.  It was exciting, as always, to throw streamers, but especially in a game nobody expected us to win.  And just like that, it was another Ivy split.

On Tuesday, Penn plays Princeton in the final Ivy game of the season.  We lost badly at Princeton in January, but we have a large group of students that we hope will turn out in force at the Palestra tomorrow.  And, if these past few months have given us any indication of patterns, we will probably beat them and continue the season of splits 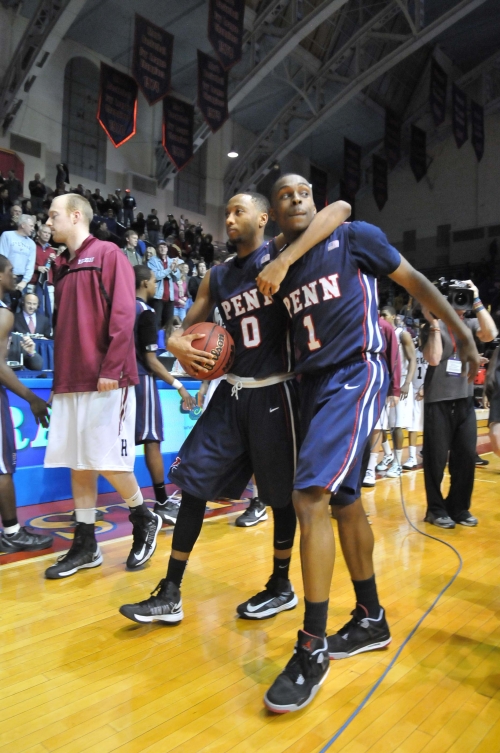 Junior guard Miles Cartwright (left) and freshman guard Tony Hicks walk off victorious after combining for 36 points in a 75-72 upset over Harvard Saturday. From the DP. Photo credit: Andrew Dierkes

It has been an up and down ride, and one that will hopefully give the team the necessary experience and confidence to compete for the Ivy title next season.